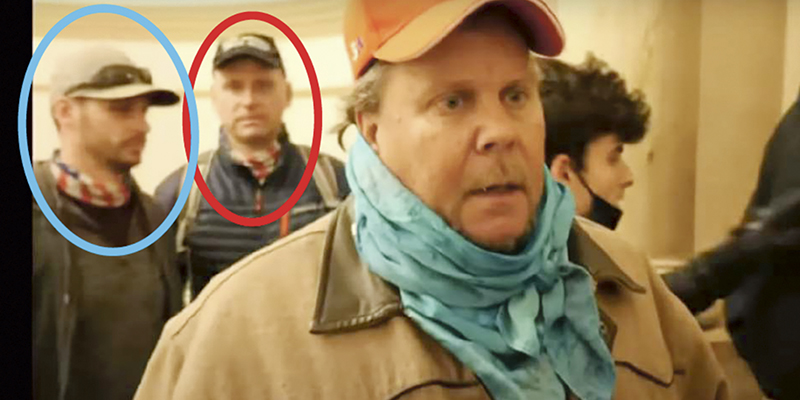 Daryl, red circle, and Daniel Johnson, blue circle, pictured in this screen capture included in federal court documents, have been sentenced in relation to the Jan. 6 Capitol riot. Photo provided

DES MOINES, Iowa (AP) — A federal judge on Wednesday sentenced a northern Iowa father and son to prison for their participation in the U.S. Capitol riot on Jan. 6, 2021.

Daryl Johnson, 51, and his son Daniel Johnson, 30, both of St. Ansgar, admitted to entering the building through a broken window and pushing through a police line once inside.

Daryl Johnson will serve 30 days in jail, the time recommended by federal prosecutors, and Daniel Johnson with serve four months, less than the six months prosecutors sought. Defense attorneys for both men sought probation and no jail time.

Federal Judge Dabney Friedrich handed down the sentences in Washington.

Daryl Johnson’s attorney, Christopher Davis, wrote in a sentencing memo that Johnson is a politically conservative, passionate man who got caught up in the moment and now admits he was wrong to enter the Capitol.

“I have no explanation nor any excuse. I was wrong to enter the capital and behave like I did. I simply am heartbroken; I know there is no way I can make amends. The only option I have is own my failure, ask for forgiveness, and pay the price required,” Johnson said in court documents.

In social media comments after the attack, Johnson posted that Jan. 6 marked the beginning of a revolution that could lead to “hangings on the front lawn of the capitol.” On Feb. 7 he posted, “Bring it on Biden! I have no problem dying in a pool of empty shell casings.”

Davis argued Johnson, now a convicted felon, can no longer carry a gun for protection or vote and his businesses, which include laundromats, a tanning salon and a car wash, could suffer as a result of the felony conviction.

Documents filed by Daniel Johnson’s attorney, Allen Orenberg, said Johnson works for a roofing company and lives with his parents in St. Ansgar, a town of 1,100 people near the Minnesota boarder, 130 miles northeast of Des Moines. He previously listed an address in Austin, Minnesota.

In court documents, Orenberg said Johnson believed what he read on the internet and heard from President Donald Trump about the election being stolen but didn’t plan to enter the Capitol “until Mr. Trump invited everyone to march to the U.S. Capitol.”

Both men pleaded guilty in January to one felony count of civil disorder. The government agreed to drop other charges, including disorderly conduct, entering a restricted building and demonstrating in a Capitol building.