Minnesota StarWatch: Parade of the cosmos 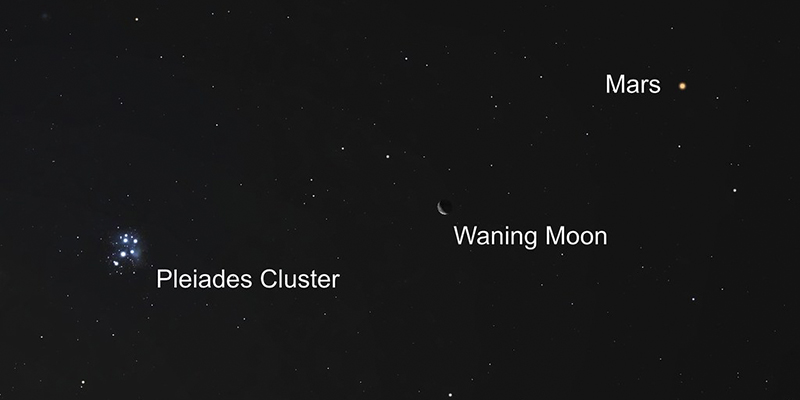 July opens with four morning planets—Venus, Mars, Jupiter and Saturn—strung out in that order from northeast to south. By month’s end, Saturn will be moving into the southwest and both Saturn and Jupiter start rising before midnight.

Earth laps Saturn in the orbital race on Aug. 14, and we catch up to Jupiter on Sept. 26. As for Mars, it’s getting steadily brighter, but we won’t lap it until early December. If you’re unsure which object is Mars — or even if you’re quite sure — you may want to get outside just as day starts to break on the 22nd, when a waning crescent moon will be about midway between the Red Planet and the lovely Pleiades star cluster. 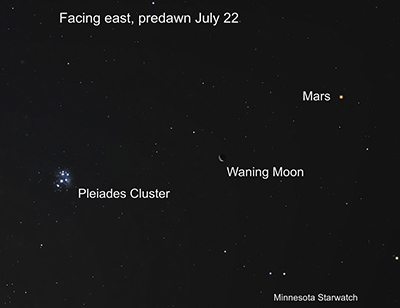 Venus lingers very low in the east to northeast, but with the morning sky staying dark longer each day, we don’t have to get up quite so early to catch it.

In the evening sky, Scorpius scrapes the southern horizon at nightfall. On the 10th, a waxing moon will be close to the scorpion’s heart, the gigantic red star Antares. High above Scorpius shine two brilliant stars. To the west, Arcturus anchors the kite-shaped constellation Bootes, the herdsman. To the east, Vega ornaments the smaller constellation Lyra, the lyre. Vega is also the brightest of the Summer Triangle of stars, which also includes Deneb, in Cygnus, the swan; and Altair, in Aquila, the eagle.

July’s full moon will be another big, luminous supermoon. It gets its large size by arriving on the 13th, the same day it swoops closest to Earth in this lunar cycle.

On July 4, Earth reaches aphelion, its farthest distance from the sun: 94.5 million miles. On that day we’ll be moving most sluggishly in our orbit — 18.2 miles per second, compared to 18.8 miles per second when we’re closest to the sun.