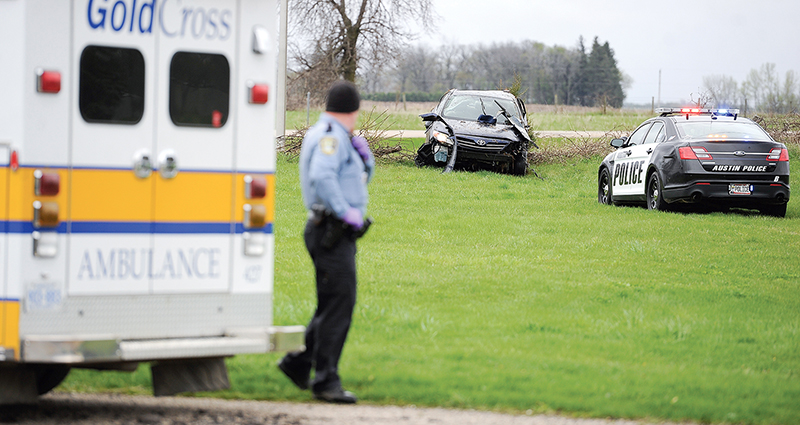 An Austin Police officer watches a car involved in a crash on Interstate 90 on the west edge of Austin in April of 2017. The driver, Jude Thomas Mary O’Neill, was sentenced to nearly two years in prison on Thursday. Herald file photo

After over five years, a Minneapolis man has been sentenced to prison time in connection to a 2017 incident that ended in the crash of a stolen vehicle on the outskirts of Austin after a short chase.

Jude Thomas Mary O’Neill, 25, was sentenced to 23 months in prison with 905 days credit for time served for felony theft of a motor vehicle. He was also ordered to pay $1,122 in restitution.

Three other felonies of a violent felon in possession of a firearm, machine gun and short-barreled shotgun possession and altering serial numbers on a firearm.

O’Neill, along with Stephanie Anne Pruitt, 52, were arrested in April of 2017 after law enforcement was called to a report of a vehicle driving recklessly on westbound Interstate 90 on April 27.

The vehicle was clocked at 94 mph in a 65 mph and lost control before entering the median just past the Oakland Avenue Exit. The vehicle  ended up high on the north side of the interstate.

O’Neill fled, but was later arrested not far from where the vehicle had crashed.

It was discovered that the vehicle, a 2013 Toyota, was stolen and a search of the vehicle resulted in two sawed-off shotguns and several backpacks, which contained methamphetamine residue and drug paraphernalia. A baggie of marijuana was also discovered.