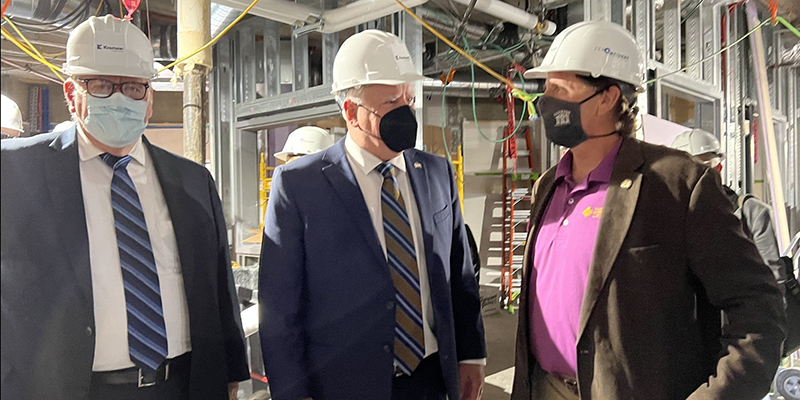 Clad in hard hats and face masks, Gov. Tim Walz and Sen. Jim Abeler paused a tour this week of a psychiatric hospital floor being built at Children’s Minnesota. They applauded the political teamwork that helped the project along and had a sidebar discussion about how to break other logjams at the Capitol.

In their brief exchange, the DFL governor and Republican legislator concentrated on a $1 billion package for health and human services that is hung up over how to divide the money. Abeler, R-Anoka, told Walz that nursing homes are in more dire condition than child care facilities and need to be shored up first.

“Child care will get by,” Abeler said. “Nursing homes and group homes might not.”

Neither endeavor will see more money if the Legislature remains deadlocked and unwilling to reach a special session agreement, the governor added.

“If you guys would come back today, I’d call you back,” Walz said.

Such on-the-fly discussions are occurring with some frequency these days as Walz conducts ceremonial bill signings for the smaller-reach legislation that did pass in May. The big stuff remains stuck with everything intertwined.

Top state leaders are set to meet again Thursday afternoon about the possibility of a special session to advance stalled tax and budget bills. There have been few signs of actual progress since the regular session adjourned weeks ago with much unfinished.

Committee chairs and agency commissioners were previously instructed to resume conversations and report back to the governor and legislative leaders. House Speaker Melissa Hortman, DFL-Brooklyn Park, said there has been incremental progress in the areas of dispute, including around transportation and education.

“If folks are committed to working towards achieving the goals for the people in the state of Minnesota, we can get it done,” Hortman said in an interview.

Walz said he’s not giving up yet.

“The public, Minnesotans want us to get this, and I will still contend we’re very, very close,” Walz said Tuesday. “I’ve done this long enough to know what far away looks like. And I am committed to coming back to that table to reach a compromise.”

In mid-May, Walz stood outside the Capitol on a picture-perfect day next to Republican Senate Majority Leader Jeremy Miller and DFL House Majority Leader Ryan Winkler to announce a $12 billion pact.

Four billion dollars over three years would go to tax cuts. Four billion to spending on schools, nursing homes, public safety programs and other key initiatives. And four billion would be left untouched in case the economy goes into a slump.

Lawmakers still had to fill in the details. And that’s where problems arose. They were hung up over how to parcel out $1 billion for schools. They couldn’t agree on how much of another $1 billion would go for long-term and other assistive care versus child care programs. Public safety had some sticking points, too.

A tax bill was buttoned up. It would have delivered an income tax cut, enacted a Social Security tax reprieve and put more to property tax relief programs. But the House had to vote first and DFL leaders said they wouldn’t let that bill pass in isolation.

Now, there are on-and-off talks about how to move ahead. It’s more carry over than start over.

But leaders know they would need to have all of the bills locked down. In a special session, bills would all be subject to amendments and dissenters could slow the process down. That gives the minority party caucuses some additional leverage.

Lawmakers also failed to pass a bonding bill – the debt plan to pay for a range of construction projects. That roughly $1.5 billion measure was considered close to being finalized, and it requires super majorities to pass. But the bill was never lined up for a vote once the budget talks bogged down.

There’s far more that lawmakers want to get done than they have to.

The Walz administration says it might need the Legislature to put up matching funds before it can apply for federal infrastructure dollars. Even with that, there is a dispute over whether that is necessary.

Walz said the record state surplus leaves room for all sides to have priorities fulfilled.

“I don’t know how you walk away from the largest tax cut in Minnesota history. I just really don’t, especially if you’re quibbling about $30 million in a $1 billion education budget,” Walz said.

As much as they want the tax cuts, many Republicans are uneasy with the amount of new spending overall a year after the Legislature approved a two-year, $52 billion budget.

One thing in the background: Seven Senate Republicans have August primary challengers, some from their right flank.

Standing just a few feet away from Walz at the hospital press conference was Republican Senate Finance Committee Chair Julie Rosen. She is retiring after this term.

Rosen, R-Vernon Center, said things seem to be sliding backwards rather than toward consensus.

“I think everybody should just pump the brakes a little bit. Let everyone have a chance to collect their breath. The discussion certainly can continue, but the urgency at this point is not there,” Rosen said, voicing skepticism about a special session anytime soon. “Not at this moment, at this time, at this month. It will take a while for this to all settle out.”

Speaker Hortman said at some point there needs to be finality though.

“In my view, I think it would be optimal if we would get to a ‘go, no-go’ decision by June 15. And then get a special session wrapped up within a week or 10 days following that,” Hortman said, noting that Minnesota has a part-time Legislature and many members have outside pursuits. “There’s not an unlimited amount of time that people can dedicate to number one being a legislator and number two being a candidate running for reelection.”