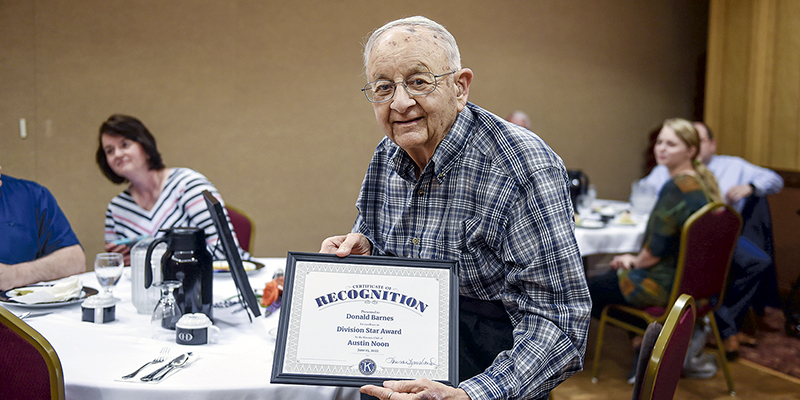 Donald Barnes holds his plaque honoring him for being a Division Star Award Winner by the Kiwanis Club. He was honored during a Noon Kiwanis meeting Wednesday at the Hormel Historic Home. Eric Johnson/photodesk@austindailyherald.com

The Austin Noon Kiwanis Club had a dignitary in its midst Wednesday over the noon hour, however, in this case it was a dignitary they were well aware of.

During a meeting at the Hormel Historic Home, the club honored longtime member Donald Barnes who had been awarded the Division Star Award for Division 6, District 13, which includes all of Minnesota and both North and South Dakota.

Donald Barnes, center, says the Pledge of Allegiance with family and Noon Kiwanis Club members during a meeting Wednesday at the Hormel Historic Home. Eric Johnson/photodesk@austindailyherald.com

Barnes has a rich history of giving back and volunteering both within the Kiwanis Club as well as outside of it, including a steady participation in the Boy Scouts as a Scout Master for 15 years along with being a Unit Commissioner.

Barnes first became a member of Kiwanis when he joined the Golden K Club in 1998, where he was the president. In 2010 he joined the Noon Kiwanis Club.

Barnes said that Fredrickson wanted him to join the club in 1998 and invited him to the annual world wide convention that same year.

During his time with Kiwanis, Barnes served as chair of Inter Club visits and is routinely involved with the club’s track and field opportunities for kids. He also organized the schedule for the Salvation Army kettles, often being seen ringing bells himself.

Outside of Kiwanis, Barnes has been active in his church and served for 20 years on the board of the Hormel Historic Home. He is also a lifetime member of the Farm Bureau.

“It’s been remarkable,” Barnes said. “It’s an opportunity for service.”

Tjomsland said Barnes has been a true example of the good that Kiwanis members do, especially so in the Noon Kiwanis Club’s 100th year, which it looks to celebrate later this year.

“Donald Barnes is a man with a great smile and personality and he is an exemplar of the Kiwanis Division Star Award,” Tjomsland said, reading from the nomination form.

Barnes said that anybody thinking of joining Kiwanis or any service organization should take the steps to joining.

“I’m honored to receive this award,” Barnes then added.