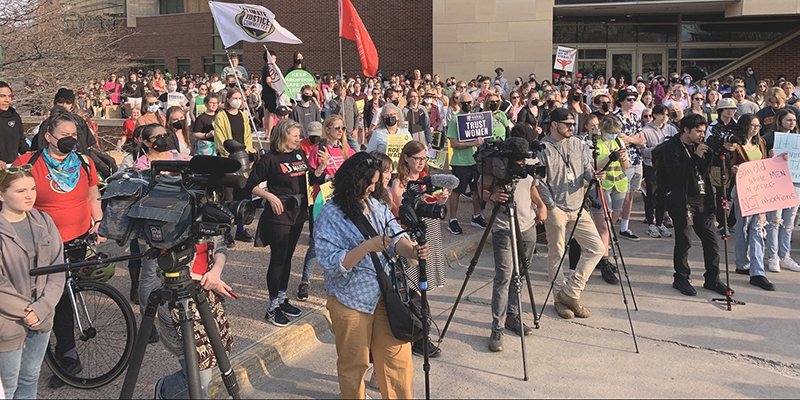 Hundreds of people rallied at the U of M in Minneapolis in support of abortion rights on May 5, 2022. Matt Sepic/MPR News File

With its ruling ending nearly 50 years of a national right to abortion, the court shifted abortion law decisions back to the states. DFL and Republican leaders in Minnesota agreed abortion will shape the political debate in this year’s race for governor.

“Reproductive rights are on the ballot in November, and the stakes could not be higher,” DFL Gov. Tim Walz said in a statement, calling his office “the last line of defense against an abortion ban in Minnesota” given the Supreme Court ruling.

Walz said his Republican opponent Scott Jensen would “ban abortion without exceptions for rape and incest.”

In March, Jensen told MPR News he would work to ban abortion in Minnesota if the Supreme Court overruled Roe. But in a statement Friday after news of the court decision, Jensen was less assertive about his intentions, saying that if elected, he would promote “loving and caring alternatives like universal adoption.”

St. Paul-based Planned Parenthood North Central States noted that “abortion remains safe and legal in Minnesota, Iowa and Nebraska, and today’s decision will have no impact on patient care in those states. Our doors remain open.”

Minnesota’s abortion protections have been validated by the Minnesota Supreme Court. In the 1995 case Doe v. Gomez, state justices determined that the procedure fell under the constitutional right to privacy.

That constitutional protection in Minnesota cannot be changed by Legislative action but its boundaries may still be tested, said Jill Hasday, a professor at the University of Minnesota Law School.

“When Roe was still good law there wasn’t the same kind of pressure on state constitutional law,” she said. “Now that the federal constitution no longer provides any protection, I would anticipate that there’s going to be significantly more litigation in the state constitutional area about what exactly are the boundaries of that right.”

Groups and political leaders who oppose abortion celebrated the decision and say they will work to make them illegal in Minnesota.

“Those of us in the pro-life movement will be working to support laws that will protect everyone, protect the human rights of all human beings at every stage of development,” said Minnesota Citizens Concerned for Life spokesperson Paul Stark.

Rallies in support and in opposition to the Supreme Court decision were expected to take place Friday in Minneapolis and St. Paul.

Given the ruling, Minnesota’s likely to become a destination for people seeking abortions, especially from neighboring states.

Whole Woman’s Health, which in February reopened a clinic near the Minneapolis-St. Paul International Airport to aid patients from out of state, said Friday it will be increasing staff, physicians, and appointment availability in Minnesota.

On Friday, leaders of the Red River Women’s Clinic in Fargo, N.D., confirmed plans to move the clinic across the river to Moorhead, Minn.

North Dakota is among states with a law on its books making performing an abortion a felony, punishable by up to five years in prison and/or a fine of $10,000 once the Supreme Court overturned Roe v. Wade. It doesn’t go into effect until after legislative action.

Plans to relocate the Red River Women’s Clinic to Moorhead have been in the works for a while, said director Tammi Kromenaker. Still, she said the news Roe v. Wade had been struck down was shocking.

She said she saw the first news story online Friday morning, “then the phone rang and I had to make an appointment with a patient. It was surreal.”

Democratic U.S. Sen. Tina Smith: “This decision is an extraordinary betrayal not just of women but democracy itself.”

Minnesota Senate Minority Leader Melisa López Franzen, DFL-Edina: “Minnesota has been a national leader in reproductive freedom, and we must continue to lead today by protecting fundamental rights. We must not and will not go back.”

Minnesota Senate Majority Leader Jeremy Miller, R-Winona: “Today is a victory for every unborn child, affirming their life has value and is worth protecting. Senate Republicans are committed to working together to find consensus on protections for babies, and support for moms and families who choose life.”

Democratic U.S. Rep. Ilhan Omar: “This decision is a blow to everyone who believes in the 14th amendment and to anyone who believes there are limits to how much the government can control the decisions we make in our private lives.”

Minnesota House Minority Leader Kurt Daudt, R-Zimmerman: “While there is no immediate impact here in Minnesota, this is an important step toward building a nation that values and recognizes life as a gift that should be protected.”

Co-chair of the Congressional Pro-Life Caucus, Republican Rep. Michelle Fischbach: “Roe put judges in charge of abortion policy, imposing laws legislated by unelected judges that left Americans without a voice. Now, thanks to this Supreme Court, the American people will be able to decide the issue of abortion through their elected officials.”