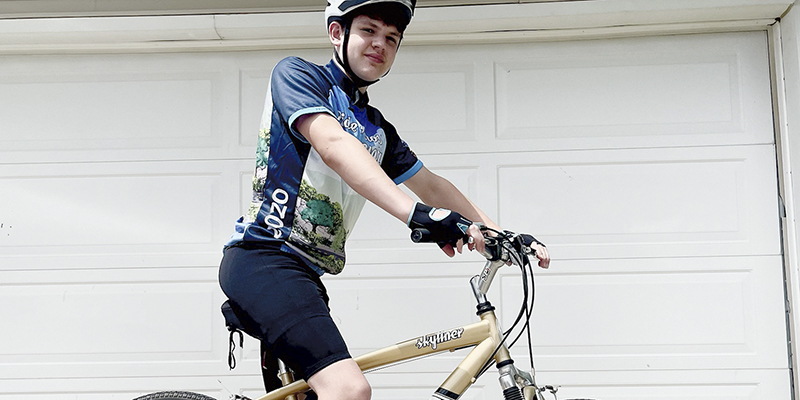 Anthony Schnable will be taking part this weekend in the 150-mile BIKE MS:MS 150 Minnesota. Photo provided

Anthony Schnable, who will be heading into seventh grade next school year in Hayfield, doesn’t shy from a challenge, even if it’s a 150 mile bike ride within 36 hours.

Schnable is taking part in the BIKE MS:MS 150 Minnesota Ride this weekend, that will take him from the starting point just outside of Duluth in Proctor all the way south to White Bear Lake.

The ride is a fundraiser with a goal of $2 million for 2022. Schnable himself has raised over $350 for the ride.

Schnable only recently received his bike, but almost right away he had his goal set on something much bigger.

“I wanted to do the RAGBRAI, but that’s a long race,” Schnable said. “We chose the MS 150 because it’s a shorter race to start with.”

The RAGBRAI route traverses about 430 miles across the northern part of Iowa and is noted as the 11th shortest ride of RAGBRAI’s long history.

Not that this route will be a cake walk for the first timer, with plenty of hills and the aforementioned time limit of 36 hours. Still, Schnable is simply rising to a challenge.

“I was told to make goals and the first thing that came to mind was bike riding,” Schnable said.

With the backing of a dedicated family, Schnable began training for the ride across the back roads and highways crisscrossing the area in an effort to become familiar with just about any terrain he might encounter during the ride.

His mom and Discover Austin Executive Director, Nancy Schnable has been his training partner for a lot of his biking, trailing behind to provide lights.

“We know the route, but we don’t know the terrain,” she said.

The route breaks down to the 1,792 riders clearing 75 miles on the ride’s first day on Saturday, with the rest of the race to be finished by Sunday. It’s an incredible journey for Schnable, who just finished his sixth grade year in Hayfield.

“I’m very proud of him for going outside of his comfort zone,” Nancy said. “It’s quite a task for a 12-year-old to take on. Anthony was determined.”

Schnable is excited to be hitting the road this weekend, but he hasn’t forgotten his first target and is already looking forward to it.

“I want to do the RAGBRAI after this,” he said, adding, “I want to thank my supporters for the help along the way.”