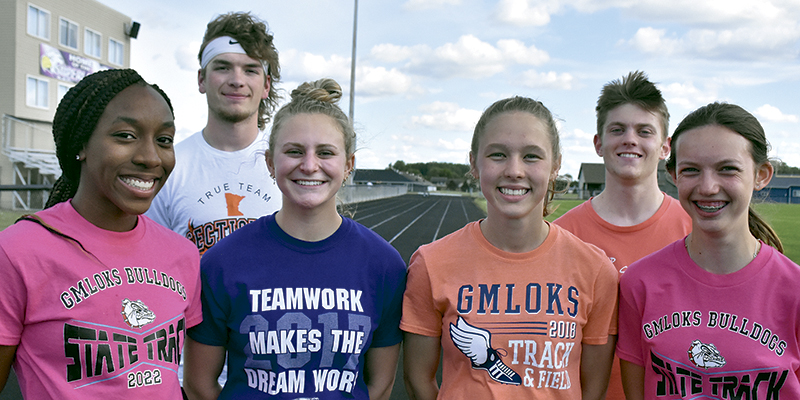 The GMLOKS 4 x 200-meter relay team has made a name for itself in the state of Minnesota, and the leader of that relay is hoping to write one last chapter in her final run on the big stage.

Kingsland senior Anika Reiland was the lead runner on that relay team in state as a seventh grader, but she anchored it over the past five years at state, with the last three appearances ending in a state title.

“We’ve had a new team every year, so it’s the same amount of pressure we’ve had every year,” Reiland said.

As Reiland closes the book on her stellar GMLOKS career, she’ll be getting Southland teammate  Breely Galle, an eighth grader, a look at the big stage. Galle has had a whirlwind year, but she’s kept up with the top runners on the team throughout the spring.

“It’s kind of scary being an eighth grader at state,” Galle said. “My teammates have helped me a lot.”

Oehlke has gone out of her way to help out Galle this season, and although she knows what it’s like to win a state title, she’s still feeling the pressure.

“We’re both nervous and excited. We’re mostly nervous and it’s probably going to hit us on Friday in the prelims,” Oehlke said. “It’s nice to compete with all different age levels and we’ve taught Breeley how to work the handoffs this year.”

GMLOKS also has three throwers competing at state as Riley Paul is back after qualifying last year. He will throw the discus and shot put, along with sophomore Lexy Foster.

“It’s the same as a regular meet with a little more pressure. As long as you can handle the pressure, you should be fine,” Paul said.”

Christian Luthe will throw the discus.

“We’ve worked together quite a bit and the practice in competition pushes us,” Luthe said.

Luthe, who is from Southland, and Paul, who is from Grand Meadow, lined up against each other during football season but they have thrived as teammates.

“We’ve been friends since eighth grade,” Paul said. “We’ve always played against each other in football. Those games were fun and it’s great to be teammates on the track.”

Foster has set the program record in shot put and discus for GMLOKS and she’s only getting started as she has improved throughout the year.

“We compete against each other, but we come out here every day and work to get better,” Foster said. “I’ve always looked up to my coach Becca. She’s pushed me to get harder and she’s my role model.”