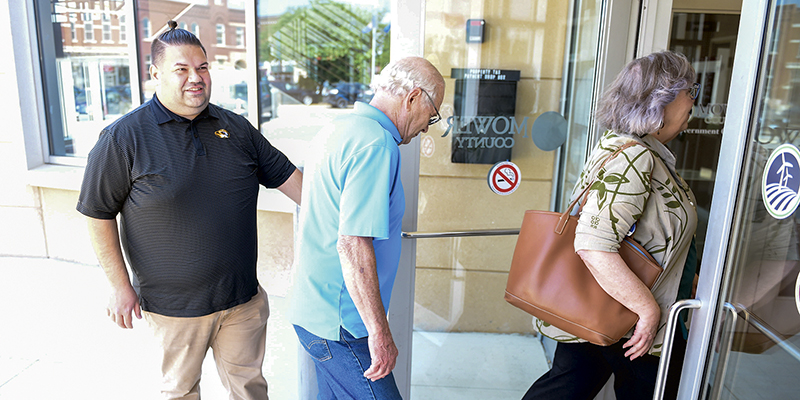 Sue and Vern Grove along with Bill McClain walk into the government building on Friday for the start of early voting in the lead-up to Aug. 9 primary and special election. Eric Johnson/photodesk@austindailyherald.com

Absentee voting for one of the most unusual elections ever opened up today.

Those wishing to vote by absentee ballot can no do so at the election office in the Government Center now through Aug. 8 for the Aug. 9 primary and special election.

If you haven’t voted by absentee, but wish to, then stop down to that same office and fill out an application. You can then vote that same day.

What makes this year’s ballot so different is the special election to fill the remainder of Rep. Jim Hagedorn’s 1st District term, which runs through December.

However, early voters Friday morning indicated they had little trouble in discerning the potentially confusing layout of the ballot.

“I think it went pretty well,” said Bob Maus, who voted by absentee with his wife Sue. “It’s pretty much self-explanatory.”

Maus also felt that it was an important opportunity for voters.

“I think it’s good to know you have the job done,” Maus said. “To get the vote in. It’s good to have the opportunity to do that.”

As voting opened, Ettinger said Friday outside of the government center, that he and his camp were feeling pretty good going into absentee voting.

Ettinger claimed over 64% of his party’s vote for an overwhelming win in May’s special primary. Internal polling by the Ettinger camp showed a statistical dead heat in the race with Finstad initially. After introducing positive and negative messaging for both candidates, however, the results reflected a slim 50% to 47% and 49% to 47% edge respectively by Ettinger.

“I’m feeling confident,” Ettinger said. “We had a wonderful first run. We had 64% in the primary and won every county. It’s really exciting.”

That same poll reflected fears of recession was a high priority among those questioned. Twenty-seven percent were concerned with the cost of living and inflation, with the next most important issue being 12% guns and 10% election security.

“I’m old enough to remember other recessions, but in the last 20 years this is one of the top concerns for voters,” Ettinger said, pointing out that he feels his business and economic background give him an edge in that area.

When it comes to inflation, 51%f of voters want a candidate to focus on helping those who need it most with 44% wanting somebody who will make spending cuts to government programs.

However the numbers break down, Ettinger said his intentions narrow down to one thing.