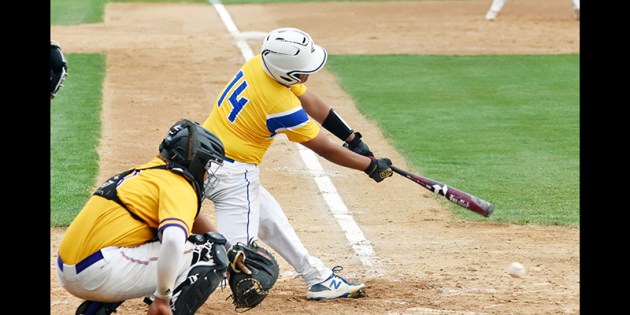 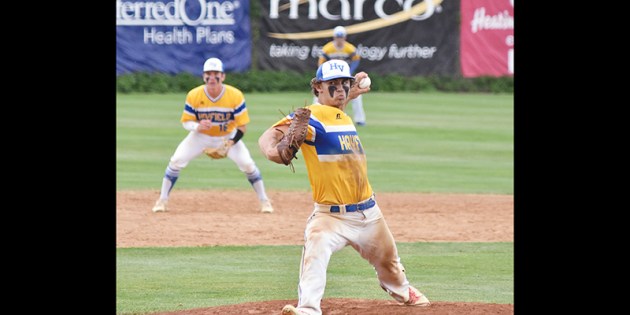 Hayfield's Easton Fritcher fires a pitch. Fritcher scored a shutout win in his final pitching start for the Vikings in the Class A semifinals. Herald File Photo 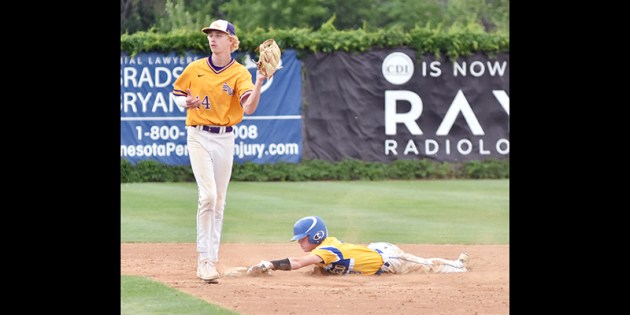 Hayfield's Kobe Foster slides safely into second base against Sacred Heart in the Class A semifinals Wednesday. Rocky Hulne/sports@austindailyherald.com 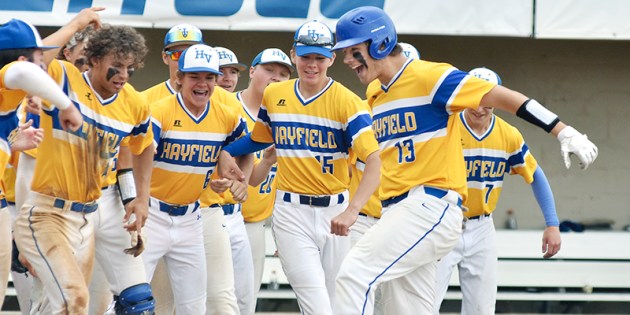 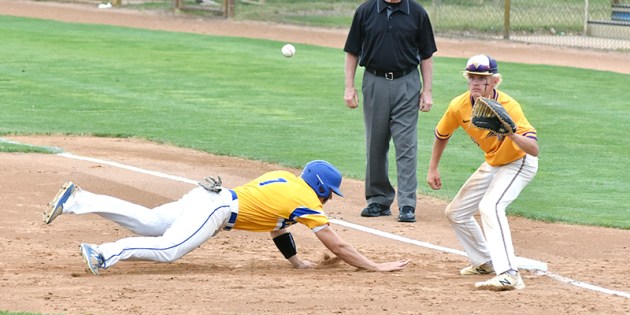 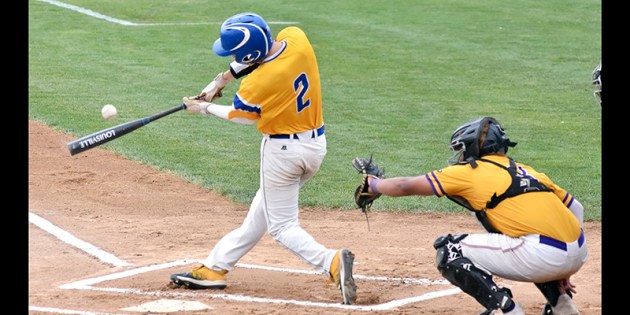 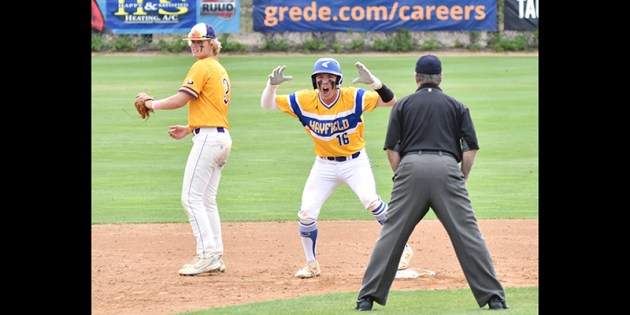 ST. CLOUD — Hayfield senior Easton Fritcher has done a lot for the Viking baseball program and he wasn’t about to let his final mound start slip away.

Fritcher delivered 13 strikeouts as he put together a one-hit shutout for top-seeded Hayfield, which ousted No. 4 Sacred Heart 6-0 in the Class A state semifinals in Joe Faber Field Wednesday.

Fritcher, who started pitching for the Vikings as an eighth grader, was completely dominant in the win as Sacred Heart’s lone hit was an infield hit and Viking outfielders never had to make a play on the ball all day. Fritcher made three assists from his pitching spot and shortstop Karver Heydt and third baseman Ethan Pack had just one assist each.

“It was deja vu. We played Sacred Heart in our first ever state tournament game four years ago,” Hayfield head coach Kasey Krekling said. “Easton was jittery and nervous in that game and it was probably his worst start of his career. They had a DI JuCo guy on the mound and they beat us. This year the roles were reversed. Easton wanted to avenge his loss from that year and he did it.”

The only threat that the Eagles (22-4 overall) were able to put up against Fritcher came in the bottom of the second inning when he walked back-to-back runners with one out. Hayfield was up just 1-0 at the time and the pressure was on, but Fritcher took a moment to chat with Krekling and responded by converting a strikeout and forcing a pop out.

“I think I got a little too comfortable there,” Fritcher said. “I was kind of grooving there and then after those walks, I had to step it up and start pounding the strike zone again. The strike zone was very good and it was small, but you had to hit your spots. I wasn’t hitting my spots early in that inning, but everyone’s got to have a bulldog mentality on this team and I had to battle back.”

Hayfield, which is looking to repeat as Class A champs, will now play Randolph, which beat the Vikings 6-5 in eight innings on May 3, in the Class A title game at Target Field at 10 a.m. Friday. Fritcher, who is projected to play outfield for the Minnesota Gophers next spring, will move back to shorstop in the title game and Hayfield ace Nolan Klocke will get the start.

It’s been a long journey for Fritcher as he was part of the first ever Hayfield team to make a state tournament as a freshman. He may have gone four-for-four in state tournament appearances had it not been for COVID-19, which cancelled the baseball season in 2020.

Fritcher didn’t have fond memories of his first start against Sacred Heart, but he has now wiped the slate clean.

“I totally forgot about that game, or at least I tried to forget about it. I had a lot of success that year and that was not a memorable game for me. Once Kasey told me that, I wanted the ball and all of the memories started coming back to me. I wanted it so bad,” Fritcher said. “Kasey told me I had 115 pitches and I told him I would give it my best shot. All I could ever ask for was to end my pitching career like this.”

Hayfield (24-2 overall) took a 1-0 lead in the top of the first on an RBI double by Karver Heydt, but the biggest blow of the game came from sophomore Zander Jacobson, who launched a two-run homer over the left field fence during a five-run third inning.

“I was in a slump and it felt great to break out of it today,” Jacobson said.

Jacobson wasn’t sure where he found the energy to compete in two big events within a few days, but he knows that he’s put in the work to do it.

“I’ve been lifting weights and I’ve been practicing and trying to get better. I’ve been working hard. I learned a lot watching both teams last year,” Jacobson said. “It feels good going back to back in basketball and we’re hoping to do the same in baseball now. We got here, and now we’ve got to defend it.”

Krekling is hoping his team can close things out after a spring in which they have impressed him throughout.