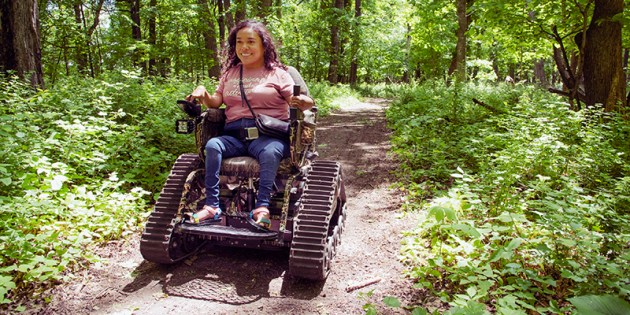 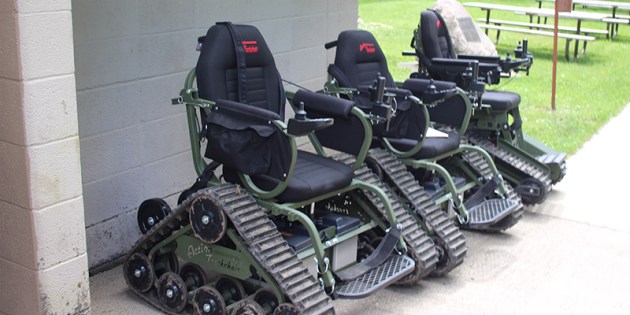 Track chairs were lined up outside the picnic pavillion at Myre-Big Island State Park Wednesday to celebrate the track chair that will be available at the park. Alex Guerrero/Albert Lea Tribune 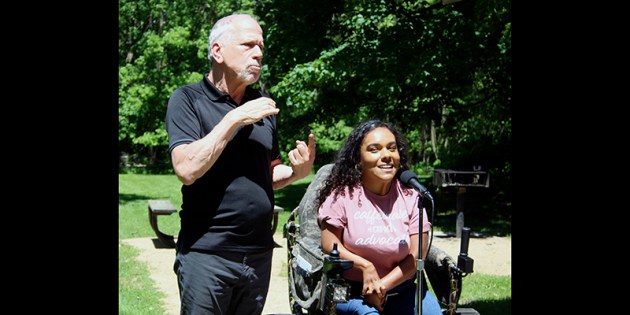 Brittanie Wilson had an opportunity to try out a track chair earlier this year and said she enjoyed the experience. Alex Guerrero/Albert Lea Tribune 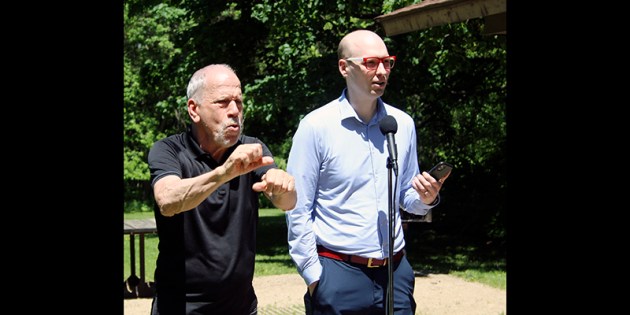 David Dively, executive director for the Minnesota Council on Disability, thanked the DNR for partnering with them. Alex Guerrero/Albert Lea Tribune 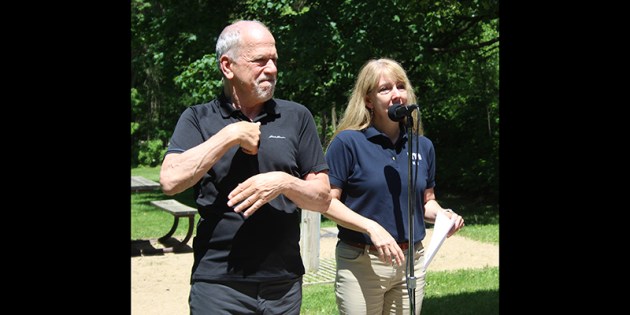 Visitors with mobility disabilities will now be able to explore Myre-Big Island State Park through the use of a new all-terrain mobility chair that was introduced Wednesday afternoon at the park.

“The track chair program is designed to get people who rely upon a wheelchair for everyday life out onto trails to experience the known health and wellness benefits of the Minnesota state parks,” said Jamie McBride, program consultant for Minnesota state parks and recreation areas.

He said a lot of people have reached out about accessible amenities.

Each chair is modified to distribute the rider’s weight so that it is spread out. According to McBride, the design allows the chairs, which would typically have difficulty navigating soft terrain or gravel, to easily navigate the terrain.

“They get people out onto the trails,” he said.

Myre-Big Island was chosen during a selection process where accessible trails with state parks was discussed. One trail in all of the state’s 75 parks was examined, with the goal of distributing the chairs geographically. This is a pilot program to determine the future of the chairs.

Twelve chairs were brought in for the event, including from Olmsted County and the Jay C. Hormel Nature Center in Austin.

“I’m excited to be here to celebrate this new opportunity in Minnesota state parks and also in local and regional parks,” said Shannon Lotthammer, assistant commissioner for the Minnesota Department of Natural Resources.

She called it a personal passion for her and Sarah Strommen, commissioner of the DNR.

“One of the hallmarks of her effort is to connect more people with the outdoors, and a huge part of that is making sure that our outdoor spaces are accessible to all Minnesotans so that we can all enjoy these beautiful spaces that Minnesota has to offer,” she said.

“Minnesota state parks are available for everyone to enjoy,” Lotthammer said. “These kinds of efforts and this partnership with other units of government, with private enterprise and with nonprofits, really helps to make sure that that promise that we have really comes to fruition, and that all Minnesotans can enjoy these beautiful spaces and we can increase access for everyone and to the benefits that being outdoors provides.”

“We have demand for a lot of accessible amenities within the state parks,” McBride said.

He also called the response to the chairs tremendous.

“A lot of comments I’ve seen on ‘this is what accessibility looks like,’” he said.

David Dively, executive director for the Minnesota Council on Disability, said he was proud to partner with the DNR, and said it was a place where citizens encountered safe government the most.

“Ensuring that Minnesotans have full and equal access regardless of disability is so important to fulfilling … one of the goals that our agency has,” he said.

He said one of his goals is to have a track chair, beach chair or adaptive vehicle at every park.

Brittanie Wilson, communications officer for the Minnesota Council on Disability, got to try out a chair earlier this year. Wilson has been disabled her whole life and uses an electric wheelchair.

“Wheelchairs give so much freedom of movement,” she said. “But one thing that a lot of typical wheelchairs don’t offer for you is the ability to off-road and explore nature in an uninhibited and free way.”

She also said it was important for the community to know about the track chairs, something she had seen but never used.

She said her time on one was fun and admitted to not wanting to stop.

“I tried them out originally in the winter, and I would have to say, as someone who can be really affected by the cold weather, for the good hour that I was trying the chair out I didn’t even notice that it was freezing cause it was just so much fun. They make you feel like a kid again.”

Luke Reese, director of the Jay C. Hormel Nature Center, then shared his experiences using track chairs, which for them started last summer while celebrating its 50th anniversary.

“Our Friends of the Hormel Nature Center organization was trying to find ways to kind of celebrate that,” he said. “We settled pretty early-on on trying to get more people out into nature, and so access was a big thing.”

He said raising money for the chairs was easy. The Nature Center’s two chairs were unveiled this past December.

Anybody interested is welcome to come and try out the chairs, which will be available through the fall. Call one of the parks where they’re located to reserve one. Numbers for the parks are available at https://www.dnr.state.mn.us/state_parks/track-chairs.html