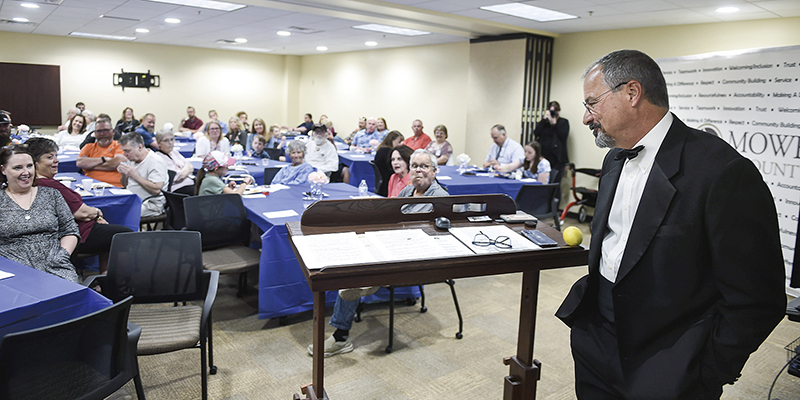 On Tuesday night, Mower County employees were treated to a special recognition dinner and awards ceremony.

The event, held for the first time, was an effort to reward and bolster employees for the strengthening of county departments. Several awards were given out throughout the night as employees were lauded for their efforts each day to keep the county going in a positive direction.

“We want to thank you for the attention given to various achievements,” said Mower County Board of Commissioners Chair Jeff Baldus. “You, ladies and gentlemen, are making things work.”

Baldus went on to say that the changes toward betterment within county departments had been readily noticeable over the past few years; positive changes that have contributed to workplace growth.

Those changes have shifted county employees toward an environment that focuses on service.

“I find it very exciting that we, as a county, are trying to be service oriented,” Baldus said, who also noted that leadership is being picked up by all of those working within the county. “It’s exciting to see you, as individuals, taking ownership. We’re pleased with the direction we’re heading.”

County Administrator Trish Harren used some of her history of working with other entities to point out how important it is to value employees. To recognize them for the work being done.

While some places she’s worked for in the past had been disappointing in that area, others had pointed toward the direction things needed to be done.

“I learned employee recognition was really a big part of every organization I was a part of,” Harren said. “Mower County has given me that opportunity.”

According to Kris Kohn, HR director for Mower County, work toward planning Tuesday night’s event started at around the first of the year.

Working with Mary Holtorf, who herself works with organizations to help develop leadership, Kohn said the genesis for the recognition came first from reading and sharing the book, “The Power of Moments.”

It comes down to further instilling the core values of a strong organization that values employees.

“We want to celebrate those people who share those core values,” Kohn said.

The awards ceremony was not completed by press time, but look to Saturday’s Austin Daily Herald to get a rundown of all those who were recognized Tuesday night.