Clamoring for Change: Prairie Clamor’s third go is a progression of pop refinement 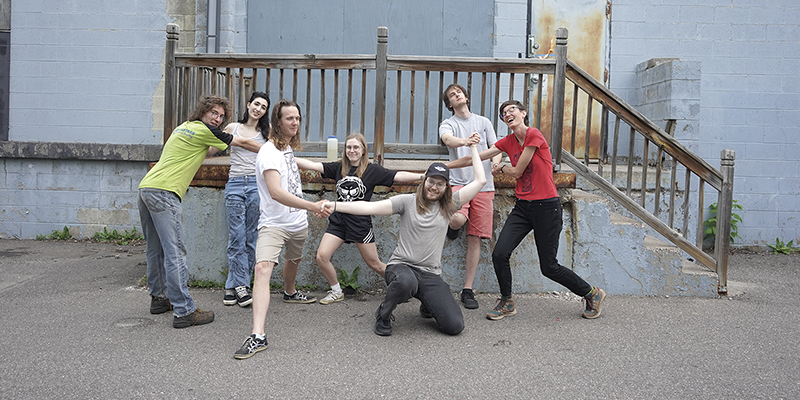 Prairie Clamor is back with its third album “True Songs.” This time around a full band will be feature in live performances. Photos provided

Local musician Will Bjorndal has never been afraid to mix things up.

His musical project, Prairie Clamor, has been the epitome of that willingness to try new things, however, this same spirit of experimentation is now undergoing some refinement with this third album “True Songs,” now out.

“So much has changed,” Bjorndal said. “The first album I would just sit down with an instrument and start making sounds and randomly record. I wasn’t writing songs, I was just sort of piercing them together little by little. I was already working on the final product right away. The songs didn’t cycle through a lot.”

“True Songs,” lays out a little different this go around, with more of an intentional thought process that has leans to a more refined project.

It comes with experience.

“I write the songs beforehand,” he said. “I think about the whole song and sit down with an instrument and get the lyrics written out. I’m trying not to fall totally into a habit of writing the same way.”

Bjorndal has never really seemed content to idle in the same position. Often his approach hinges on trying new things while at the same time balancing it with an emotional approach to his writing.

This spirit has become increasingly important after the unfortunate timing of this second release, “Spilling Light,” which bounced to listeners in 2020 at the very beginning of the COVID-19 pandemic.

“The second one happened at the worst time possible to put out an album,” Bjorndal said. “It came out on March 27, the same time when Minnesota went into lockdown.”

“Maybe we should have delayed it or something,” Bjorndal contemplated. “But, that’s when it came out. A lot of time and thought went into that record.”

“Spilling Light” was a 17-song labor of love for Bjorndal that clocked in at over 70 minutes with detours from his pop roots into metal and other forms of music.

As Bjorndal describes it, there was a lot of genre hopping going on.

At the time the pandemic seemed to be something of a song-writing boon for Bjorndal, but as it stretched out it became more of a challenge.

“I had some good song writing at the beginning of the pandemic,” he said. “Then it was harder to write songs somehow.”

Whether it was the pandemic itself weighing down or a plethora of other things in his life, Bjorndal can’t put a finger on any one thing.

At the same time the pandemic also had an effect on “True Songs.” It delayed recording and kicked the proverbial can down the road, but the roots were definitely there.

“I definitely had a goal,” he said. “I really wanted to make a genuine, earnest piece of art that I think anybody could approach. Something that could speak to as many people as possible.”

Will Bjorndal has advanced Prairie Clamor to a more refined sound with this third outing. Photo provided

“True Songs,” is definitely a piece of pop, with hints here and there of the aforementioned genre hopping. On the opening track “Energy Park” has a very definite rock drive to it, but the fourth song, “Beautiful Blue Skies and Golden Sunshine” features a guitar track that seems almost country at times.

Underneath it all, from fast-paced to self-described mid-tempo and groove-laced numbers, “True Songs,” is a definite Prairie Clamor project, just with more depth.

There’s an emotional thread that ties each song together with the next on an album that Bjorndal intentionally fashioned to be accessible.

“I really wanted to make a pop record in terms of catchy songs,” he said. “I wanted the album to be a digestible length.”

The result is a mature album with songs that range from those high-tempo and energetic songs all the way to more soulful and emotional offerings.

“It was really amazing bringing these songs together,” Bjorndal said. “Music is something to share.”

Another aspect to “True Songs” will play out in live performances. It marks the first time that Bjorndal will have a stage band. In the past live performances have been limited to Bjorndal and his brother Peter.

“I like the idea of having a live band,” Bjorndal said. “It’s a bit more exciting to me. Bringing other people into the fold you get more ideas. You can kind of get stuck in your head. Bouncing ideas off other people is really amazing.”

“True Songs” can be seen as a progression in an ever-evolving process. Bjorndal admits he’s still learning with each album the process of writing, but the adventure will always be worth it for the outcome.

“I still feel like I’m figuring out how to write a song,” he said. “It’s easy for a songwriter, and this is true for a lot of artists, to fall into a formula.”

Prairie Clamor will be playing this Sunday, June 12, at Pride Fest here in Austin. The time of the band’s performance has yet to be decided.

Prairie Clamor can be found on Band Camp, Apple Music and Spotify.