A new opportunity: Eight Packers are ready to experience the state track and field meet for the first time 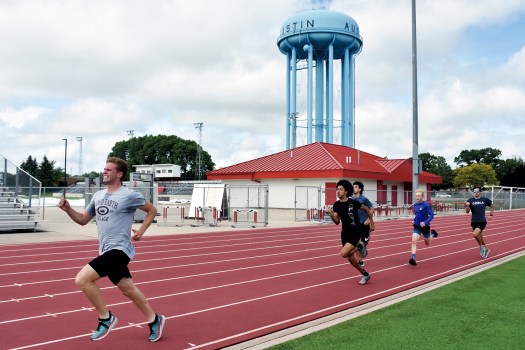 Kaden Murley leads the pack during track and field practice at Larry Gilbertson Track and Field Monday. Murley and the Packers will compete at the Minnesota Class AA state track and field meet on Friday and Saturday. Rocky Hulne/sports@austindailyherald.com 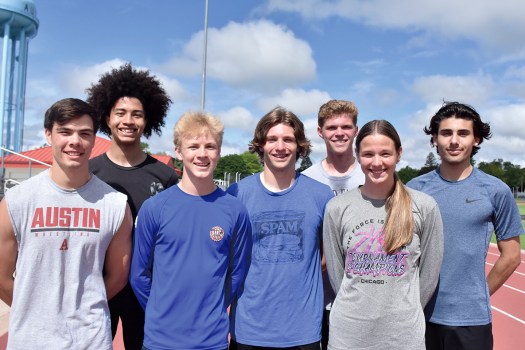 What a difference a year makes.

A year after it did not qualify any athletes for the state meet, the Packer track and field team has its biggest group of state qualifiers in a decade and the group of eight qualifiers will compete at St. Michael/Albertville on Friday and Saturday.

Austin was given a better chance for postseason success this season as the Minnesota State High School League added a third track and field class, with the Packers remaining a Class AA team. That meant Austin avoided the bigger and deeper teams like Farmington and Lakeville North in last week’s Section 1AA meet.

Austin junior Olivia Walsh took advantage of the changes by qualifying for her third state meet of the year. Walsh was in the state swimming meet in the fall and played with the Packer girls basketball team in the state tournament this winter.

“It’s a lot easier when you know that you have a chance. We won’t be going against these insane athletes at state. That definitely helps,” said Walsh, who will compete in the high jump and triple jump. “My goal this year was to go to state in all three sports and I’m really happy that I was able to achieve that. It was a lot of hard work in practice and staying mentally tough, especially with the rough weather we had. We didn’t have a lot of practice time.”

“It’s good to experience things for the first time with a good supporting cast,” said Murley, a senior. “We all know each other and we all want to support one another.”

“That’s the first time I’ve jumped that high in a very long time,” Terry said. “I’ve just got to keep working on it. It’s very frustrating, especially when you can’t reach the goals that you’re trying to reach. The form part of it is very hard.”

Terry and Murley were both members of the Austin boys basketball team that made it to state this past winter and they were able to make the quick turnaround to track season by taking the first week of practice off to recover.
“State basketball was a good time for us and we had to focus on moving on and trying as hard as we could in our next sport,” Murley said.

Walker played football in the fall, but didn’t play a winter sport. He spent his time working on form in the Packer Dome and now his hard work has paid off this spring.

“This was a fun year. We’re always trying to win all of our events during meets. That was the goal,” Walker said. “We’ve ran together for most of our life and it’s cool to see that we’re all going to state for the first time together.”

Walsh will be competing in the high jump finals at 9 a.m. Friday. The prelims for Class AA will take place that day and the Class AA finals are set for 9 a.m. Saturday. Both events are in St. Michael/Albertville.

Although she is very driven on her own, Walsh credited the success of Walker and Terry for helping her stay motivated this spring.

“No one ever wants to lose, especially to the boys. I just try to keep up with the boys and we try to help each other get better,” Walsh said.