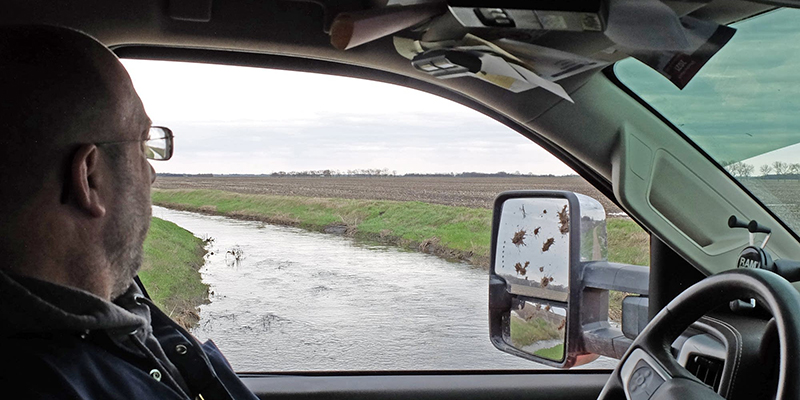 Jared Nordick checks the level of a creek that flows through his property in Wilkin County on May 10. Dan Gunderson/MPR News

Jared Nordick has been spending more time than usual the past few weeks double and triple checking the equipment he will use for planting, and monitoring the condition of his muddy fields.

Nordick grows corn and soybeans in Wilkin County about 45 minutes south of Moorhead.

The fields are still yank-your-boots-off muddy.

“It’s kind of like anybody playing in their garden. You know when it’s fit and when it’s not,” said Nordick. “If your fingers are wet and muddy, you’re gonna go back in the house and you pick something different [to do].”

On a recent drive around his property, Nordick stopped along a ditch where water gushed from a pipe. Pumps are pulling about 700 gallons a minute from drain tiles buried three feet below the surface of a soggy field.

The soil is saturated from consistent heavy rains.

“I’ve always said it’s kind of like a sponge on the back of Grandma’s sink,” said Nordick. “If the sponge is dry, I can hold an inch of moisture without pumping any. But when we’re this wet, we’re removing just about most of it right now. I mean, it’s a lot of water.”

Nordick thinks it will be late next week at the earliest before his fields are dry enough to plant.

Wet conditions are affecting farms across much of the state, said state statistician Dan Lofthus with the USDA National Agricultural Statistics Service.

“You know, sometimes we’ll have a real wet spring in a certain part of the state where the rest of the state is not experiencing those conditions,” said Lofthus. “This year, it’s pretty general across the state, I would say, and even beyond Minnesota. So we’re not alone.”

Planting is delayed across much of the Midwest.

Last year at this time, topsoil in Minnesota farm fields was 44 percent short or very short of moisture. This year that number is five percent.

The dry conditions last spring helped planting go forward without a hitch across much of Minnesota.

But the planting delays this year in Minnesota aren’t unheard of.

“The comparison of this year to last year looks drastic,” said Lofthus. “To put that in a little context though, we have had other similar years. We’ve had years like 2011, 2013 and 2014, 2018 and 2019. All had very similar planting progress, at least as of this time period in the calendar.”

Delayed planting can reduce yields at harvest, but the right weather conditions throughout the growing seasons can overcome a late start.

“This does feel late and a difficult spring for farmers, although we’ve tackled years like this in the past,” said Lofthus.

Final planting dates to qualify for full crop insurance coverage are coming up in late May and early June for most Minnesota crops. Planting after those dates would reduce the coverage for any crop failure.

If there’s a stretch of dry weather, Nordick can finish his planting in about a week of long days.

“Vegetable farming is very labor intensive. So you can’t just hop on the tractor and go 24 hours a day and try and get as much done as you can,” he said. “You’ve got to use labor, you’ve got to use other people and you’ve got to use your body, which wears out after awhile. So it’s hard to catch up.”

And if the weather switches quickly from too cold to plant, to summerlike temperatures, early cool-season crops like broccoli and peas won’t do well.

“If we don’t get some of that cool spring weather, things will bolt, or go to seed quickly. And then definitely you can have losses. It’s going to depend on how this weather settles out,” said Van Eeckhout.

Most vegetable growers don’t have the same crop insurance coverage corn and soybean farmers rely on in a bad year.

April was not only wet and cold, it was cloudier than normal. Van Eeckhout says without sunshine, greenhouses needed extra supplemental heat, leaving farmers with bigger fuel bills.

And high gasoline prices will also cut into farm profits this year for farmers moving a lot of produce to market.

“That’s a huge factor for the farmers we work with. And I think we’ll see higher prices at farmers markets because of that,” Van Eeckhout said.

Like many large corn and soybean farmers Jared Nordick has his fuel supply locked in at a lower price.

But supply chains could still throw a wrench in his planting plans. He worries when it is dry enough to plant, every farmer in the region will be planting nonstop and there will be delays in getting fertilizer.

“That’s going to be the biggest hurdle right now is when we do get going are we going to be waiting three to four days for fertilizer, because everybody’s going to want it at once,” Nordick.

Nordick is still optimistic, he sees drier weather in the forecast.

“We’ve got some time yet, we just gotta be patient.”

If the fields don’t dry out by the end of May, that patience will be tested.