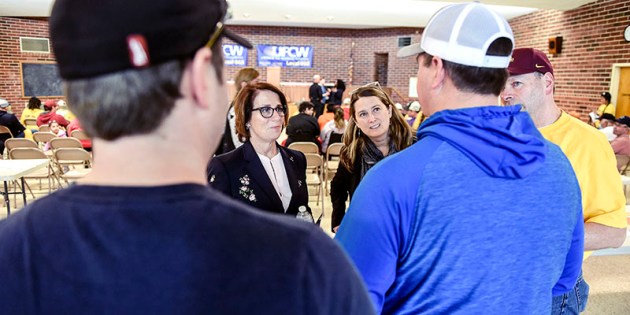 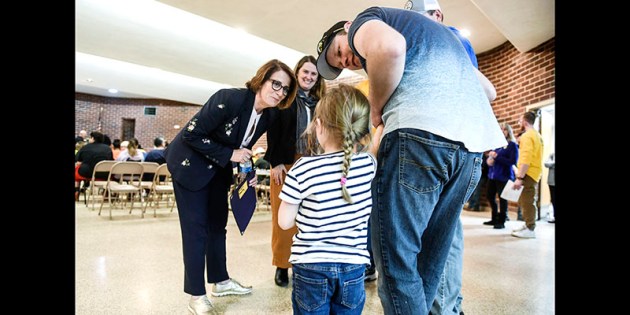 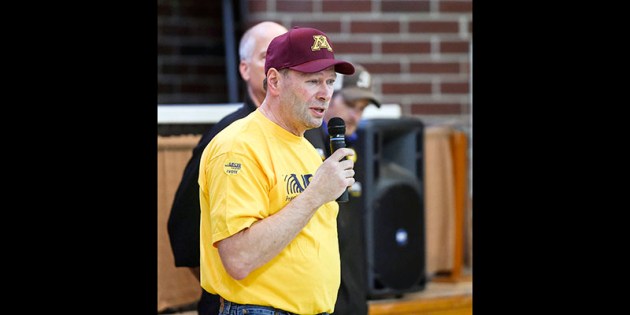 Longtime Hormel Foods employee Dan Lenway thanks members of UFCW Local 663 for their strength during the COVID-19 pandemic at the Austin Labor Center in early May. Workers may be able to sign up for the funds as early as Wednesday. Eric Johnson/photodesk@austindailyherald.com 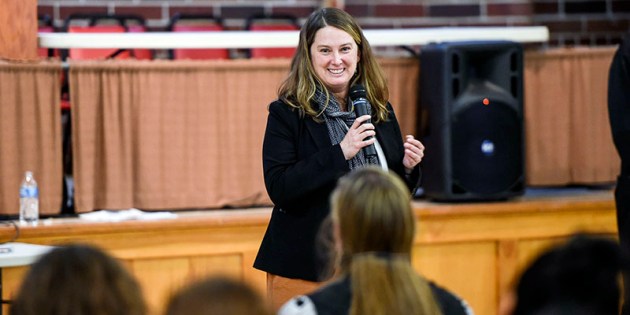 Sen. Jennifer McEwen talks to members of UFCW during a visit to the Austin Labor Center. Eric Johnson/photodesk@austindailyherald.com 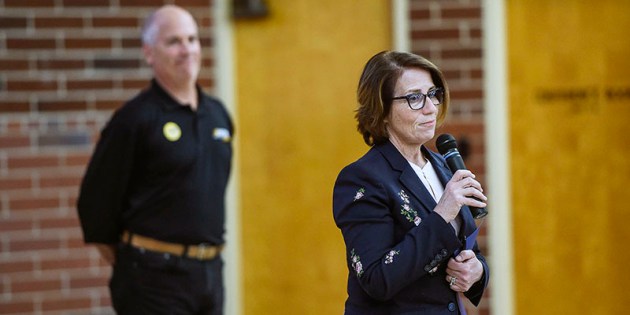 Sen. Erin Murphy thanks members of UFCW Local 663 for their work during the COVID-19 pandemic during a celebration Wednesday afternoon at the Austin Labor Center. Eric Johnson/photodesk@austindailyherald.com 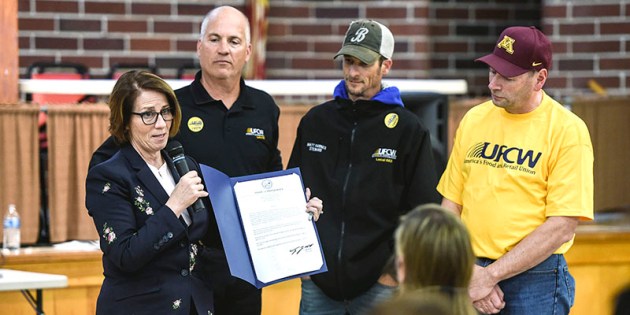 Signs of gratitude lay on a table at the Austin Labor Center during a celebration of the recently passed frontline worker bonuses. UFCW Local 663 workers are among those who will rceive payouts from the bill signed by Gov. Tim Walz last Friday night. Eric Johnson/photodesk@austindailyherald.com

On Monday, Gov. Tim Walz held a ceremonial signing ceremony for a $2.7 million bill passed Friday that will grant “hero pay” bonuses for frontline workers during the COVID-19 pandemic.

On late Wednesday afternoon, members of UFCW Local 663 celebrated the $750 each worker will receive as part of the bill during a celebration at the Austin Labor Center. At the same time, though, Wednesday signaled that in some ways this was only the beginning.

Democratic senators Erin Murphy and Jennifer McEwen, both instrumental in getting this legislation passed, celebrated with workers on Wednesday and let them know that it was because of their work that this bill was accomplished.

“This success we’re experiencing and celebrating together is because of you,” Murphy told the crowd. “Throughout the course of this fight, the reason we were successful is because you were willing to share your experiences and stories.”

The passing of the bill, signed by Walz Friday night while taking a break from his son’s volleyball game, marks one of the most notable bi-partisan successes of this legislative session, but it wasn’t an easy one.

For nearly two years, meatpackers and other workers under the Local 663 banner were kept out of the support other front line workers received, which included police, firefighters, healthcare workers and corrections.

Nobody argued against those frontline workers Wednesday, but the frustration that workers in the meatpacking industry haven’t been part of those same financial resources until now has been evident. And part of that frustration was also leveled at Republican lawmakers.

“There was a lot of frustration because they weren’t being heard about the sacrifices they were making, and we had Republican senators come out and say that the only people who are worthy of frontline worker pay were healthcare, fire, police, corrections,” said Rena Wong, organizing director for UFCW Local 663. “All credit to the work they do, but they were not the only ones who were keeping our state going.”

The legislation also rolls back a tax increase that had been needed to replenish the state’s unemployment insurance trust fund.

The Department of Labor and Industry is setting up the application system for the frontline worker bonuses. Meanwhile, the Department of Employment and Economic Development is handling credits and refunds for employers that had to pay higher unemployment insurance taxes for the first quarter because lawmakers didn’t break their impasse over the two issues until late last week.

Labor and Industry Commissioner Roslyn Robertson said a vendor will be building the online application system over the next three to four weeks. It should be running within the next month. Then there will be a 45-day application period, she said, and a 15-day appeal process.

It all represents a long time coming.

“We’ve been fighting for two years for this recognition of the work our members have done to keep Minnesota fed, to keep Minnesota going throughout the pandemic,” Wong said. “For this day to finally arrive, where they’re being publicly recognized by being given $750 is such a big deal.”

During Wednesday’s ceremony, those in attendance heard directly from members working at Hormel Foods and Quality Pork Processors. Hormel employee Dan Lenway and QPP employees Matt Karnes and Carla Ortiz all spoke to the momentous day and the work that remains ahead.

“Seven hundred and 50 dollars is actually a reward for our fight and that’s only just the beginning of our fight,” Lenway said. “We’re going to continue to show our strength … we’ll do it all together.”

“We’re thankful for the money,” Karnes echoed. “Every single day you’ve been working side-by-side with very little compensation. You guys are the reason we’ve been able to get this done.”

Both Murphy and McEwen, who co-sponsored the Minnesota Safe Workplaces for Meat and Poultry Processing Workers Act, recognized the significant sacrifices made by frontline workers in Local 663.

Throughout the efforts they heard stories of those working on the front lines and they spoke to that Wednesday.

“I also know that the people who went to work, went to work because they needed to support their families,” said Murphy, who authored the Essential Worker Pay bill in the Senate. “And this frontline worker pay is a recognition that we asked you to do something that was important for all of us. Something that most Minnesotans didn’t have to do — you did.”

They also said that the work that members of Local 663 did in these past two years helped strengthen the base the workers now stand on across the state.

“Because you came together and you fought for your rights, you strengthened worker’s rights all throughout the state,” McEwen said. “This is what solidarity is all about.”

While Wednesday was a celebration, many let it be known that this is just the beginning and represents a bigger step forward for safety in the industry.

“As a union we have been working on meat packing health and safety legislation in the state now for two years,” Wong said. “This industry, in the best of times, is very dangerous and line speeds are very fast and repetitive stress injuries are also very common. Our union has been working on this meatpacking health and safety legislation that would provide for enforcement and training and reporting from meatpacking plants to ensure workers can come home in the same condition that they left in the morning. That is the important next step here that needs to happen.”

Nevertheless, nobody in the Austin Labor Center Wednesday was likely to forget the importance of the occasion.

“The work you’ve done to continue to feed America during the pandemic is nothing less than heroic,” said Union President Matt Utecht.