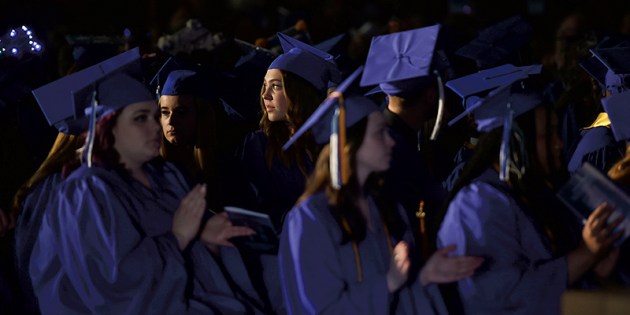 Ava Boverhuis looks back toward the audience after procesional during the afternoon commencement for Riverland Community College Friday. Eric Johnson/photodesk@austindailyherald.com 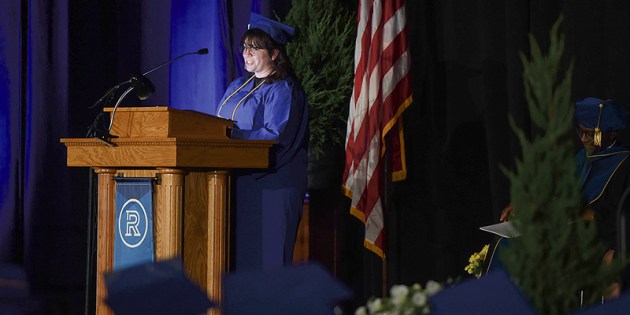 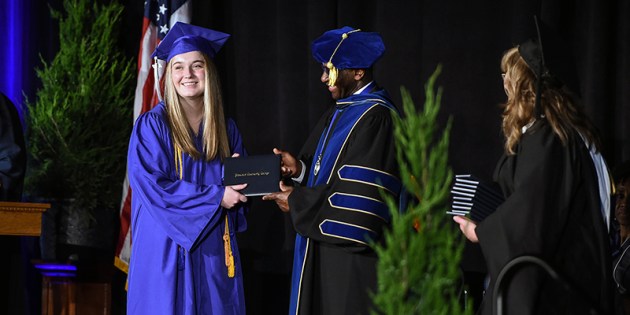 For the first time since 2019 because of the COVID-19 pandemic, Riverland Community College held in-person commencement exercises Friday.

The school graduated 587 students among two separate ceremonies with 277 of those participating between the two ceremonies.

Throughout the afternoon ceremony there seemed to be an emphasis placed on the value of education Riverland provides that might otherwise be overlooked.

One of the afternoon’s two student speakers, Gracie Svien, spoke directly to that very thing when relating how others were taken aback that she wasn’t attending a “real” college.

“Real college is any college,” she pointed out, later saying, “I knew Riverland was the right decision.”

Svien graduates with an Associate of Arts degree in psychology with aspirations of lending her skills to the mental health field.

Along the way, Svien told the audience that not only did she get her education while attending Riverland, she also learned about herself in the process.

“Being at Riverland taught me about myself, my goals and the world and people around me,” she said. “I’ve seen so much strength and resilience during my time at Riverland.”

A little bit closer to home, the day’s other student speaker spoke of the journey and how much goals mean. It also encompasses the notion of relishing the feelings of gaining a higher education.

“Think of a reason to pursue a higher education and hold onto it,” said Tanya Vanderpool, who lives in Hayfield and who graduated with her Licensed Practical Nursing diploma. “Riverland has given me the opportunity to explore moments and meet people.”

“We will keep learning whether it’s at Riverland or not,” she added.

Before the two students spoke, Riverland’s keynote speaker addressed those in attendance. Jacinth Smiley, a Hormel Foods executive and who is originally from Jamaica, traced a similar route she took to her education that Riverland students have taken.

“I think we have a lot in common,” she said. “My path … in many ways was unfathomable.”

Yet, Smiley’s journey took her from flipping burgers at McDonalds to the board rooms of Hormel, with her advanced education likewise starting at the community college level.

She urged the students to remember where they came from and to always be open to receiving help from others.

“I encourage you to be exceedingly open to support and pay it forward,” Smith said. “I share my story just to say we all have a story.”

Graduates in Friday’s ceremonies come from the fall, spring and summer semesters and attend Austin, Albert Lea and Owatonna campuses. Around 58% of students received an associates degree while the other 42% earned degrees, certificates and diplomas from various Riverland career programs.