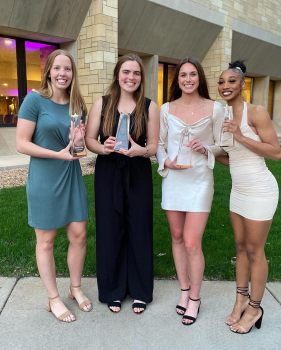 Grand Meadow grad Jordyn Glynn, third from the left, was recently named Comeback Athlete of the year at the University of Saint Thomas. Photo Provided

Grand Meadow grad Jordyn Glynn has never been one to back down or give up and she was recognized for that approach when she was named Comeback Athlete of the Year during the first annual Tommie Choice Awards at the University of Saint Thomas recently.

Glynn, a junior women’s basketball player at UST, played in just two games in the 2020-2021 season due to a torn labrum and sprained AC joint. While she did not need surgery, she went through a lot of rehabilitation to get back on the court this past winter.

“I felt pretty healthy this year for the most part,” Glynn said. “I still love playing basketball.”

Glynn was a 2,000-point scorer for the Superlarks in high school, but she’s had to change her approach to the game at the college level. Glynn turned her focus to defense as she started 17 of 24 games for the Tommies this past season.

“I had to change my game, because everyone is at a high level in college,” said Glynn. “I worked on building up my speed on defense so I could get on the court. I played a lot of one-on-one against guys, because they’re bigger and faster, to get ready for the season.”

The Tommies went 7-21 overall this season, which was the program’s first year as a Division I team. UST was playing Division III basketball when Glynn arrived on campus three years ago.

“It wasn’t as different as I was expecting it to be,” Glynn said. “The biggest change was that we traveled a lot more than we did in our Division III conference. That took adjusting with our professors and we had to make sure our school work was a priority as well.”

Glynn has the option of playing a fifth year, but she isn’t sure if she will use it yet. She does have her sights set on playing with the Tommies next season.

Glynn plans on working as a chiropractor when she is finished with college.