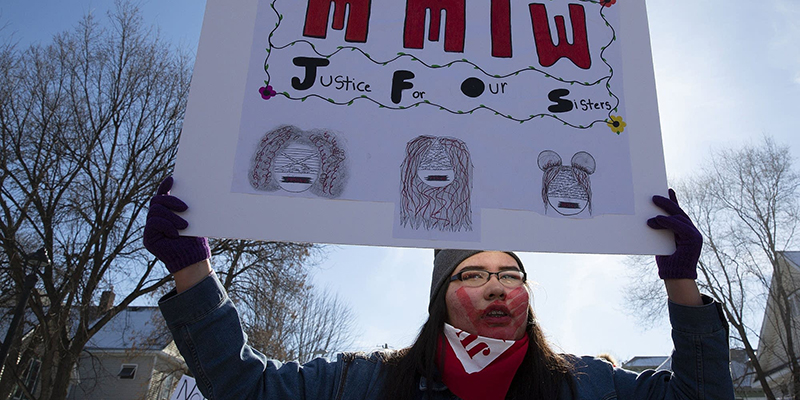 Kathleen Goggleye takes part in the Missing and Murdered Indigenous Peoples March in Minneapolis on Feb. 14. The annual event was held in honor of in honor of indigenous people who are missing or have been killed. Christine T. Nguyen/MPR News 2020

A report released May 17 by Amnesty International USA finds little progress has been made in reducing the rate of sexual violence against Native American women since an earlier report in 2007.

“At least 56 percent of Native women have experienced sexual violence, and at least one in three have experienced rape, which is 2.2 times more likely than non-Hispanic white women,” said Tarah Demant, interim national director for programs, government relations and advocacy at Amnesty International USA. “But because of the inadequate data tracking that happens by the U.S. government, these numbers are likely actually much lower than reality.”

In addition to missing data, the report identifies tangled legal jurisdiction among federal, state and tribal governments, a lack of funding for law enforcement and prosecution as issues hampering efforts to reduce the disproportionate violence.

“Data collection is something that the US government is charged with doing, it’s their obligation to do, and they collect data on other populations and on other topics. But this just hasn’t been prioritized,” she said.

Two major pieces of legislation that have helped address the issue in the 15 years since the first Amnesty report are the Tribal Law and Order Act of 2010 and the Violence Against Women Act, which was recently reauthorized by Congress.

Those laws made some progress in giving tribal courts more jurisdiction, but Demant said the process remains confusing and funding is inconsistent.

The Amnesty report calls for full restoration of tribal jurisdiction over crimes committed in Indian country, and increased funding for prosecution, law enforcement and health care.

In testimony before Congress regarding reauthorizing the VAWA late last year, a Department of Justice official said there were “gaps in SDVCJ that undermined tribal efforts to protect survivors and hold offenders accountable.”

“Over the last 15 years since our last report, we’ve seen these sort of piecemeal, almost bandaid solutions,” said Demant. “But what’s happening is that the U.S. government has a century of complex and contradictory law, which has created this problem, and the U.S. has to untangle that law in a holistic way. At the center of that is restoring jurisdiction to tribes.”

“The work of Alaska Native and American Indian women has persisted through this and continues to build their communities and their safety. And that I think, is very hopeful.”