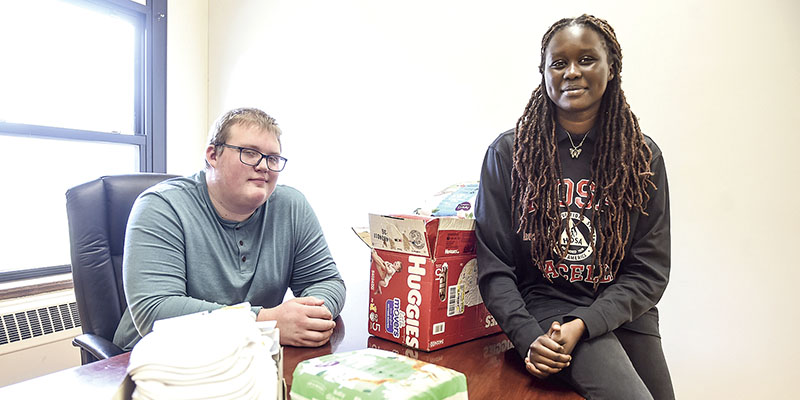 Pacelli juniors Lilly Paul and Nathan Schmidt have taken up a pair of causes that contribute directly back their school and community. Eric Johnson/photodesk@austindailyherald.com

You don’t have to look too far to find good role models in Austin.

That’s what a pair of Pacelli High School juniors have proven this spring and their efforts are gaining attention.

Lilly Paul has organized a pair of fundraisers in the month of April in an effort to support the women and girls of Austin. Through the Jean For Jesus fundraiser that Pacelli hosts, Paul raised $452.83 over both fundraisers along with collecting an assortment of baby clothes and supplies. In turn the money and items will be donated to Rachel’s Hope in Austin.

“It’s important to help your community,” Paul said. “Your community is what you really have. They support you the most.”

At the same time, her classmate Nathan Schmidt is attempting to cultivate within the elementary school the same love for the school’s library that he held as a younger student.

As a teacher’s assistant, Schmidt has undertaken the job of organizing the elementary school’s library.

“When I was younger I just saw it as a fun opportunity rather than like a class, which is usually seen as long and boring,” Schmidt said. “The library was always fun. You could open up a different book and it’s something different every time.”

Both students have used these opportunities to take an active role in the community around them in order to make it a better place and they’ve done it largely through their own initiative.

In Paul’s case, she took a cause and expanded it. Jeans For Jesus is a fundraising effort that opens the door for students to wear jeans for one day during the school week.

Money raised from the effort goes to various nonprofits and charities. However, Paul expanded that to twice in a month and spearheaded the charge on her own.

She was driven by the desire to help women, something that she has been inspired by through her own family connections.

“I think especially on my mom’s side, she’s a single mom,” Paul said. “She’s had those struggles of taking care of my younger sisters so I really stepped up in taking care of her … I don’t want other mothers like that to go through the same thing. I think it’s important to show support, but sometimes it’s hard to get support like that.”

It’s also been women who have supported Paul the most through her life.

“My biggest role models and the people that have supported me have always been women in my life,” she said. “I always wanted to be like my role models, like my sister and my mom.”

Likewise, Schmidt has looked to his own family as role models in order to achieve his work in the elementary library. Around 2015 both his mom and grandmother hosted a writing contest. Schmidt has done that as well for Mother’s Day.

Elementary students were encouraged to take part in an essay contest that celebrates mothers. The contest was organized by Schmidt.

“It’s not a fundraising thing, but as part of a service project,” Schmidt said. “A writing opportunity. I’ve started a Mother’s Day writing contest in a way where basically the kids will write a letter to their mom or anybody fulfilling that role. Basically just a letter of appreciation.”

Since taking on the task of organizing the library and getting it into an orderly state, Schmidt has discovered something within himself that he feels will lend well to the future.

“I think I’ve shown or proved to myself that I really can step into the roll of a leader, taking up or stepping into a role of starting things,” he said. “I don’t have to wait for someone else to do it. I can just do it myself.”

Paul has also gained insight into herself.

“What I pulled out from this experience is that I have done a lot to help my community, but I want to do more and I want to keep on pushing myself to help women,” she said.