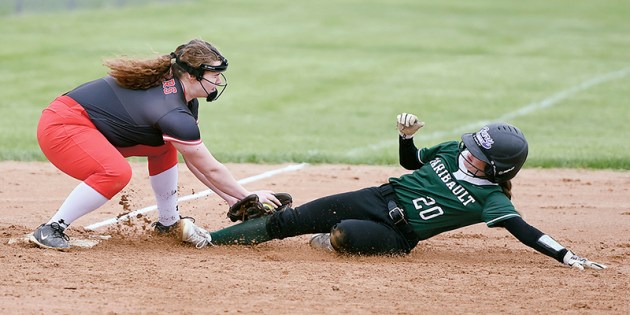 Austin’s Ava Denzer is met by teammates after scoring against Faribault in the Section 1AAA Tournament Thursday at Todd Park. Eric Johnson/photodesk@austindailyherald.com

Austin’s Peyton Squier pops a bunt up against Faribault during the Section 1AAA Tournament Thursday at Todd Park. Eric Johnson/photodesk@austindailyherald.com

The No. 7 seeded Austin softball team started fast, but it couldn’t keep the momentum going as its season came to an end in a 16-4 loss to No. 6 Faribault in a Section 1AAA elimination game in Todd Park Thursday.

The Packers (1-17 overall)  built up an early three-run lead, but it didn’t last as the Falcons racked up 17 hits over the last four innings to take over. Austin was coming off strong efforts against two of the top three teams in Section 1AAA as it nearly topped Kasson-Mantorville last week and it lost 10-9 to No. 2 Byron in the opening round.

“It really got us up when we were up on Byron and Kasson, but today we kind of went down after taking the lead. We kind of thought we were going to win,” said Austin senior Lucy Lagervall. “The last ‘Packers’ chant was kind of sad. Next year, I know they’ll be good.”

The Falcons put together nine hits to score nine runs in the second inning to go up 9-3. Faribault sophomore Olivia Smith hit a pair of two-run homers in the frame.

Austin scored three runs in the top of the second inning. Lagervall doubled in a run and Ava Denzer and Kathryn Crouch added an RBI each.

The emotions of an elimination game are always tough, and it was especially difficult for a young Packers team that hasn’t quite figured out how to be consistent yet.

“We have to remember that a lot of these girls are young. Most of them are sophomores and that brings a situation that they’re not used to yet. They kept swinging, they kept putting the ball in play and it just wasn’t quite enough. Overall, when you look at this team at the beginning of the season, they wouldn’t have fought back like they did,” Lage said. “I’m really excited to see the progress they make with the summer season and dome ball. We have good numbers at the 10 and 12U programs and we’re looking to improve Austin softball every year.”