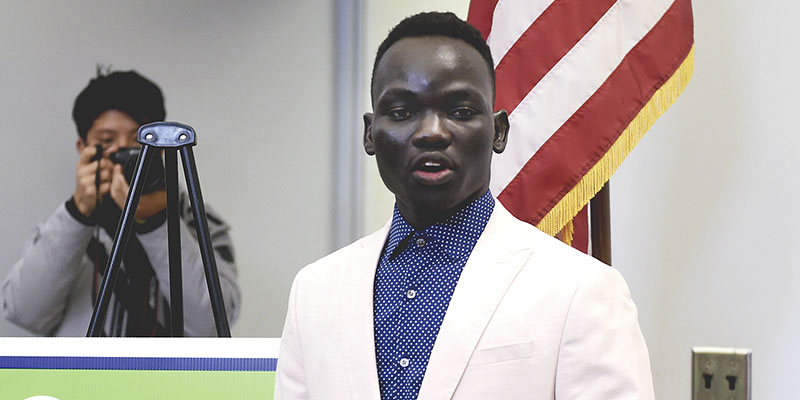 Oballa will now run for the Council’s At Large seat currently held by Jeff Austin.

“Austin has helped me make the American dream come true, and I want to continue to serve this community that I have so much appreciation for,” Oballa said in a press release Tuesday morning, prior to a press conference at City Hall. “I will use my proven leadership skills to help our community solve the key challenges of building a stronger economy, childcare, housing and engage our youth.”

Oballa has stepped down as First Ward commissioner because his family has moved outside of the ward. His last meeting was this past Monday night.

Austin also indicated Tuesday that he will run again. He said that he had heard rumors just prior to the announcement that Oballa would be running for his seat.

“I have every intention of running again for At Large and I’m looking forward to the challenge,” said Austin, who was first elected to the City Council in 2007, when he represented the First Ward before later being elected to the At Large seat.

Even though the two served with each other on the council for the past two years, Oballa said he believes it’s time for a change, but that ultimately he’s running for the people of Austin.

“I think Austin needs a fresh voice and someone who is energized, not that Mr. Austin isn’t energized,” Oballa said. But he also added, “This isn’t about Mr. Austin, but the people of Austin.”

While admitting to expecting a stiff challenge from Oballa, Austin intends on running again based on the issues that affect community members.

“I know he will be a formidable challenger,” Austin admitted. “He does a good job on getting his name and picture out there, but I’m going to run on the issues. We’re elected to make decisions and vote on the issues before the council.”

Austin also said that the community needs a proven leader on the council.

“Oballa has repeatedly refused to take stands on the council,” Austin said. “That’s not what the community needs.”

Having lived in a Kenyan refugee camp for over a decade, Oballa moved to Austin in 2013. He served in several leadership roles while attending college at Riverland Community College, both at the local and state levels. One of those experiences was as Lead MN president, a statewide student association representing the 180,000 community college students in Minnesota.

Oballa also served on the Austin Human Rights Commission from 2016 to 2020, In 2020, he was appointed by then mayor Tom Stiehm as the Honorary City Council member.

In 2020, he ran against and defeated Helen Jahr for the First Ward chair. Even though he’s attempting to switch wards, Oballa is still hoping he can represent all of Austin.

“You can vote for this kid, Oballa Oballa. This is for all of you,” he said and continued saying that he wanted to, “… make sure Austin continues to be a welcoming community.”

Highlights of Oballa’s first term in office include: