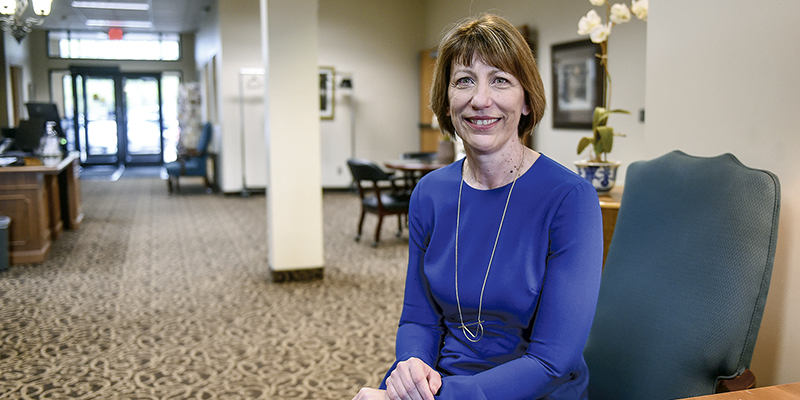 Joan Hanson has recently taken up the mantle of executive director at the Mower County Senior Center. Eric Johnson/photodesk@austindailyherald.com

The Mower County Senior Center has hired a new executive director and in the near future will be offering something new to those who use it.

Joan Hanson was hired to fill the position and has taken over for Doreen Nelson. Hanson comes to the Senior Center after retiring from Hormel Foods Corps as corporate manager of the food studio at meetings and events. She came to Austin in 1988.

Hanson said that she felt strongly that she still had something to give to the community.

“This was just a really great opportunity for me, with the skill sets that I had,” Hanson said Thursday afternoon from her new office. “I thought I could add something and I could really feel good about helping out the senior community.”

Hanson is setting those skills to work in expanding the success the Senior Center found under Nelson’s leadership and moving it forward even more.

To tell the story of the senior center to those outside of Austin.

“I think this is a hidden gem,” Hanson said. “I don’t know if a lot of folks in the county know that it’s available to anyone in Mower County over the age of 55. We do a lot of really cool things here. I’m here to tell that story.”

While there are no plans formerly in place, Hanson does have some ideas on how to get the word out in the future. It may include literally taking the senior center on the road at times during the month.

To bring some of the offerings at the center to the people further out in the county.

“Perhaps we have an ice cream social in Grand Meadow or we take our cards and maybe we play cards in Lyle,” Hanson said. “Take the senior center on the road to the folks that live in the outlying communities.”

However, before any of that is instituted, there are some upcoming projects at home the senior center is undertaking. This will include a parking lot replacement along with sidewalk replacements.

“There are big potholes and cracks and the sidewalks; they’ve disappeared. They just crumble,” Hanson said. “We really do that for the seniors coming into our building.”

Joan Hanson stands outside of the Mower County Senior Center and talks about the patio that will be added this year on the south side of the building. Eric Johnson/photodesk@austindailyherald.com

Hanson said that work should be done this summer, however, there is another project coming that will have everybody who comes to the senior center excited.

When plans started coming together for the sidewalk and parking lot work, another idea was brought to the table — building a patio area on to the center.

“As an offshoot of that, Teresa Bartholomew thought, ‘why don’t we just make a patio while we’re at it,’” Hanson said. “That’s just a terrific idea. We can have expanded programs and services and what nicer thing to do on a beautiful day then sit outside and have lunch or some nice programming outside.”

The patio area will be located alongside the south side of the building. Hanson said work will start on the patio at the same time as the parking lot, but may not be completely finished until next year.

“The patio will be poured at the same time, but we may not have all of the fencing, etc. up by then,” Hanson said. “I would like to be really optimistic and say we’ll have this by late summer … we’ll see how that goes.”