National Nurses Week: ‘I became a nurse because I was a patient’ 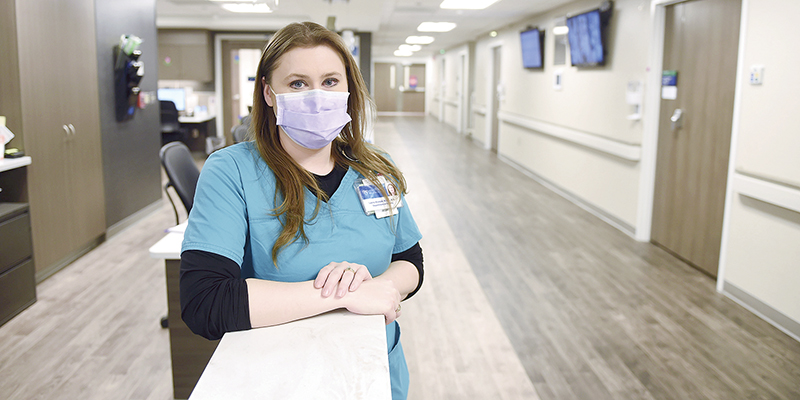 Whatever Lacey Koopal’s life goals were, they changed significantly with the birth of her son over a decade ago.

Not only did it bring her and her husband’s child into the world, but it also prompted a new career path. One she hasn’t looked back from.

“I became a nurse because I was a patient,” Koopal said. “I had my son 15 years ago and just my experience really motivated me to become a nurse.”

“I had great nurses and two weeks after I got home, I said to my husband ‘I think I want to be a labor and delivery nurse.’ He was supportive right away.”

After getting her degree through Riverland Community College, Koopal embarked on a career where she strove to support and love for all those that came under her care.

It’s been a philosophy that was forged in those experiences giving birth to her son.

“I would think so,” Koopal confirmed. “Absolutely, because it’s just a vulnerable life changing moment and just having those nurses see me as a patient was so life-changing.”

Part of what has been so life-changing is Koopal’s opportunity to share that caring specifically with the women who give birth at Mayo Clinic Health Systems-Austin, where Koopal is currently working.

Koopal gets a special joy out of being there to support the women that will be moms, whether that’s the first time or it’s another new addition to the family.

“I love helping women,” Koopal said. “I love supporting women. Helping them, encouraging them, empowering them. It’s just a life-changing moment. That’s my draw. Some nurses go into labor and delivery for babies and mine is for the women. I really love helping women become moms.”

Koopal’s career has been anchored by the notion that nurses can have a significant impact on the people they care for. She cites herself as an example.

However, Koopal also knows that throughout their stay, moms will most likely see nurses the most. In that regard Koopal sees herself and other nurses as a much-needed resource of information.

“Most information I’ve heard from my own personal experience is you don’t forget your labor nurses,” Koopal said. “You remember how they made you feel and how well cared for you were. I love to make my patients feel love. I want them to know in the couple days I’m taking care of them that I care about them. I care about their families.”

This caring extends outward from her patients though. Koopal teaches prenatal classes, as well as new employee orientation.

She’s also what is called a wellness champion, which looks at not just the physical health of those she works with, but the emotional health as well.

Koopal has been part of organizing a blood drive that impacted over 200 lives, a walk for St. Judes, which raised over $1,000 and last Christmas her and other nurses adopted a mother to be from Freeborn County, which resulted in gifts of a rocker, car seat and other items.

Currently, they are in the midst of a diaper drive for Mower County.

“Things to bring us together that not only makes us feel better, but also serves the community,” Koopal said.

While Koopal maintains that nursing is the career she was made for, she also knows that it is challenging. Long hours and difficult situations are all part of the world of nursing.

Again, her own life experiences are a part of that dichotomy.

“Things that really stand out for me would be our patients that lose their babies,” Koopal said. “I had a loss myself so that really became a passion of mine. Eight years ago I lost a baby, so I really focused on how we can improve that care for those patients. That’s kind of one avenue that’s just as important as the happy times.”

Another challenge is that sometimes social situations can play a part in the process.

“Knowing those people need just as much love and care for them while they are here,” Koopal said.

Koopal has embraced all aspects of nursing like all those who have gone into nursing before her and those that will come after.

While the challenge can be a bit much for some, she also relates that there are more than one avenue in nursing.

“I think nursing, in general, you find out real quick if it’s for you or not,” she said. “That goes with departments too. There are so many avenues with nursing though. It’s one of those jobs that you have job security. You can go anywhere in the world. There’s nurses needed anywhere. It’s rewarding, it’s stressful. The sky’s the limit.”