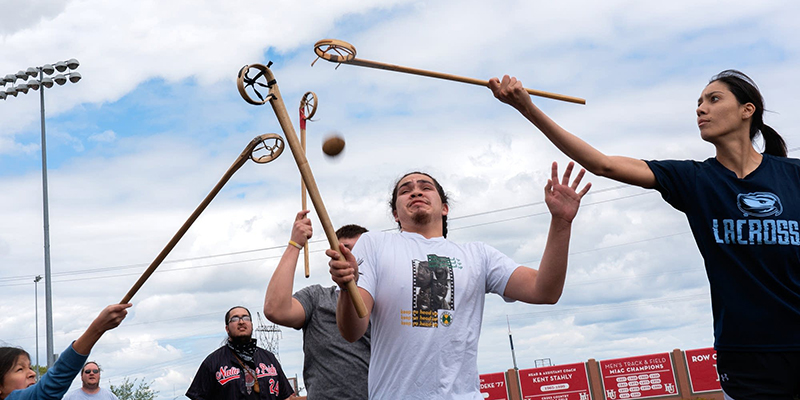 On an unseasonably cold and windy Sunday morning, dozens of players cluster together at the center of the football field at Hamline University.

Each player, ranging from elementary school kids to the parents of high schoolers, is carrying a wooden stick that’s bent into a small net at the end.

One player yells, “Sticks up,” and launches a leather ball high into the air. Everyone on the field yells in unison, and a player scoops the ball up on the end of their stick and, weaving the stick up and down to maintain control of the ball, heads toward the goal post. Getting past defenders and hitting the post with the ball counts as a score.

But no one kept track of the goals at this match. After a couple hours of play, the players strolled off the field onto the sidelines with friends and family.

Since 2014, a group called Twin Cities Native Lacrosse has brought people together to participate in the Indigenous tradition of lacrosse, which originated before colonization by Europeans.

Assistant director Sarah Wheelock of Prior Lake said Indigenous people all over the continent had their own variations of the game prior to contact. The style of sticks the group uses in their games are referred to as “woodlands.” On the East Coast, Iroquois people play the game with slightly longer sticks, which were adopted by some settlers and grew into what is now thought of as modern lacrosse, played at high schools and colleges across the country.

Although Twin Cities Native Lacrosse includes people from all tribes, it focuses mostly on Dakota and Ojibwe traditions of what they call, “the creator’s game,” or “the medicine game.”

“Many different tribes use this game as a means of prayer. And we say we play for creator, for the enjoyment, and for the fun of it, to build community,” Wheelock said. “It has also historically been used to resolve disputes, which is quite interesting when you think about how we resolve disputes in the modern system, in court systems, for example, is very different.”

The equipment and the play style is not like modern lacrosse. It’s not just the wooden versus plastic sticks, or that the goal is a post rather than a net. Or that during community games, they don’t usually even keep score.

But the biggest difference may be the values associated with the game. Traditional lacrosse players don’t wear the padding you see in modern lacrosse. That’s because the unwritten rules say that each player should be aware of their gender and strength, and not make contact with, say, younger players trying to keep up on the field.

“The rule on the field here is respect,” Wheelock said. “Respect each other, respect the equipment and respect the game.”

“There can be a lot of contact in this game as well, we end up with people getting whacked on the arms or the hands, and that happens. But when you’re playing with that respect element, the goal is not to injure anybody else.”

David [Bezh] Butler is a teacher of Ojibwe language who started learning about traditional lacrosse about eight years ago.

After struggling to make his first stick with a boxcutter, he’s become one of just a handful of local stickmakers — cutting the wood, steaming it until it’s flexible then bending it into the unique shape of a lacrosse stick. He now teaches his students to make their own traditional lacrosse sticks.

To Butler, it’s part of reclaiming heritage that was suppressed by the dominant culture.

Nina Polk, 19, grew up with the game. She’s now a member of the women’s lacrosse team at Fort Lewis College in Durango, Colorado, where many of her teammates didn’t know the game’s origins. Her TikToks share stories about lacrosse’s Indigenous history.

Polk said she’s taken some techniques from the traditional game and brought them to her college team, but she gets flustered if she focuses on the competitive aspects that dominate collegiate play. Instead, she incorporates parts of traditional games, where players begin each contest by sending out prayers for loved ones who are ill and cleansing themselves and their sticks with the smoke from sage.

Hamline University lacrosse Coach Karen Heggernes decided to honor the sport’s roots. The coach reached out to Twin Cities group to offer time on the field for community games.

“Coaches, they have the ability to reach out to their local community, native community, to offer space,” Heggernes said. “That’s why I love [Twin Cities Native Lacrosse], because it’s not just about sport, it’s also about bringing people together.”

That’s the sort of partnership that appeals to John Hunter, one of the founders of Twin Cities Native Lacrosse, who is also a modern lacrosse coach.

When the group was first starting out, traditional lacrosse was rarely played in the Twin Cities — which has the largest urban population of American Indians in the country. Hunter had to reach out to elders in places like Red Lake to find out more.

Hunter said people playing modern lacrosse are sharing in the history of the game on this land that goes back thousands of years.

Hunter said the pandemic has been hard on young players. But even as the game changes or evolves, he has no doubt that they’ll carry forward the traditional game and its values for future generations.