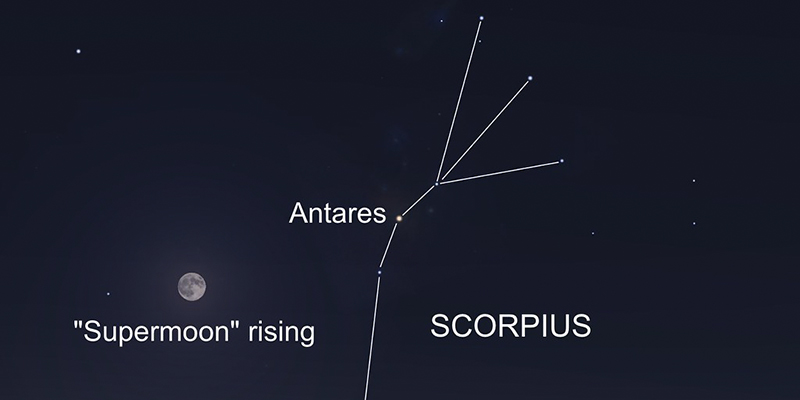 June begins with Jupiter sailing away from Mars, moving ever higher and westward above the predawn eastern horizon.

About 75 minutes before sunrise, Venus will be quite low in the east. To the upper right of the brilliant planet will be Mars, and to its upper right will be bright Jupiter. West of Jupiter, you’ll see Saturn well up in the southeast. 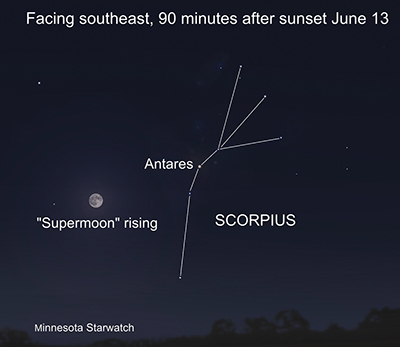 With a clear sky, an unobstructed view of the eastern horizon, and binoculars, you may spot Mercury in the sun’s foreglow, to Venus’ lower left, between about the 17th and the 25th. Once Mercury is up, all five planets visible to the naked eye will be strung out in an arc from left to right in the order Mercury, Venus, Mars, Jupiter and Saturn—the same order as their distances from the sun.

The night of the 13th-14th, June delivers a large and gorgeously bright “supermoon.” It gets its beauty by reaching fullness at 6:51 a.m. on the 14th—less than 12 hours before perigee, its closest approach to Earth in a lunar cycle. Unfortunately, on that morning the moon sets before reaching fullness. To catch it, check your local time of moonset and look to the southwest 20 minutes beforehand. Or, just watch the moon rise against a sunlit sky the evening of the 13th.

Summer arrives officially with the solstice at 4:13 a.m. on the 21st, when the sun reaches a point over the Tropic of Cancer. At that moment Earth will be lighted from the Antarctic Circle up to the North Pole and beyond to the Arctic Circle on the dark side of the planet.