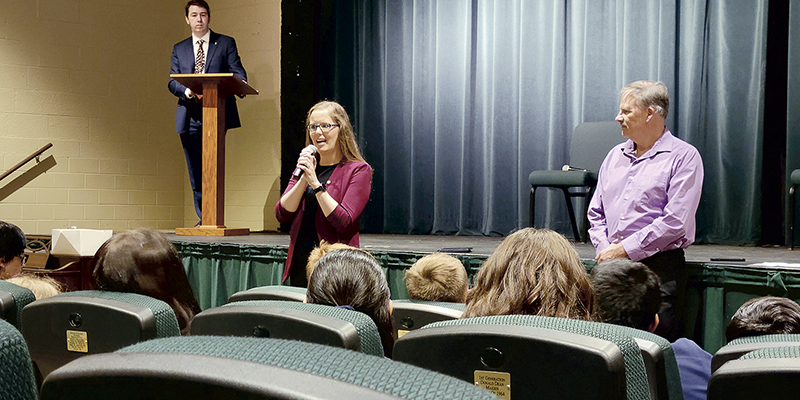 Pacelli social studies students on Tuesday got the opportunity to peer inside legislative workings during a visit by Minnesota State Rep. Patricia Mueller and Sen. Gene Dornink.

During the nearly one hour presentation, students heard about the duo’s reasons for serving in local and state politics as well as how bills are engineered and ultimately passed.

More than anything, though, it exposes students to how important government workings are.

“This is just massively critical,” said Pacelli social studies teacher Nicholas McGrath, who organized the presentation. “The legislature is the first line of defense. Sometimes students can feel so disconnected [from politics]. These people are accessible and they sincerely care.”

One of the more candid moments for the students was listening to Mueller and Dornink’s reasons for serving.

For Mueller, her primary drive came from time spent as a missionary and teacher in China, where political involvement can be much more repressed.

“I didn’t understand how unique our country was …” Mueller said. “I kept thinking how lucky we were to live in America.”

After that Mueller told the students she felt driven to take part in politics, even though she had never entertained that idea before then.

Dornink, coming from a different background, came to feel the same way about serving.

“It’s about public service. That’s what we do,” he said. “It’s kind of our duty as citizens. It’s so important for us to learn our system and give back … because we’ve been given so much.”

While the headlines are often dotted with derision and conflict when it comes to politics these days, both Dornink and Mueller stressed how important it was to talk and listen in order to get things done.

“We are both better when we debate and listen,” Dornink said. “Disagreement isn’t a bad thing.”

At the same time, Tuesday’s visit also pulled back the curtain a little bit for students on a process that oftentimes seems overly complicated.

It’s one thing to hear about it, but it’s completely different when the students get the opportunity to hear from the people involved.

“It’s here, real and accessible if you want to demystify the process,” McGrath said.