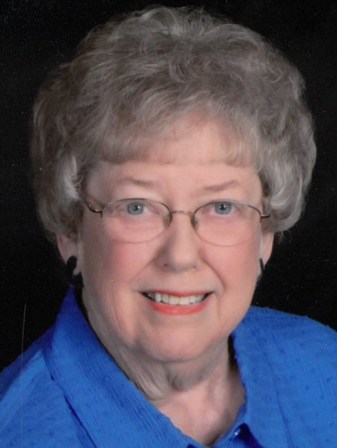 Joanne was born May 10, 1938, in Mankato, Minnesota to Leslie and Evelyn (Bendickson) Hanson. Joanne spent her early years in several different cities in Iowa and Minnesota with her parents. In 1956 Joanne graduated from Theodore Roosevelt High School in Des Moines, Iowa. She attended college at Drake University where she was a member of Kappa Kappa Gama Sorority and then later transferred to Mankato State University where she graduated in 1961 with a degree in teaching. She continued her graduate studies at Mankato State University and the University of Minnesota.

On June 17, 1961, she was united in marriage to Kenneth G. Jensen at First Lutheran Church in Albert Lea, Minnesota. To this marriage brought two sons, Scott L. Jensen and James A. Jensen.

Music was a very important part of Joanne’s life. Joanne will be remembered for her beautiful singing voice and her amazing accompanist talent. Great joy was brought to her whenever she could get someone to gather around the piano and sing. Because of her love for music, she was very active in music. She was a member of the Austin Choralaires and Northwestern Singers. She was the Northwestern Singers accompanist for many years. She was also a member of St. Olaf Lutheran Church and Our Savior’s Lutheran Church and their choirs. She also was the director of the children’s choir at St. Olaf Lutheran Church.

Joanne enjoyed entertaining friends and family, traveling, doing crossword puzzles, playing card games, surfing the internet, communicating with friends and family through emails, taking pictures and making scrapbooks of her family, friends and of the many trips that she and Ken took, and doing many crafts such as cross-stitch, crocheting and knitting.

Funeral service will be held at 11:00 a.m. on May 21, 2022, at Our Savior’s Lutheran Church, Austin, Minnesota. Visitation will be at the church for one hour before the service. Interment will be at a later date. Memorials are preferred to the Jay C. Hormel Nature Center, the Shriners Hospital for Children or the Music Departments at Our Savior’s Lutheran Church or St. Olaf Lutheran Church both of Austin, Minnesota. Worlein Funeral Home of Austin is assisting the family with arrangements. Condolences may be expressed to the family online at www.worlein.com.