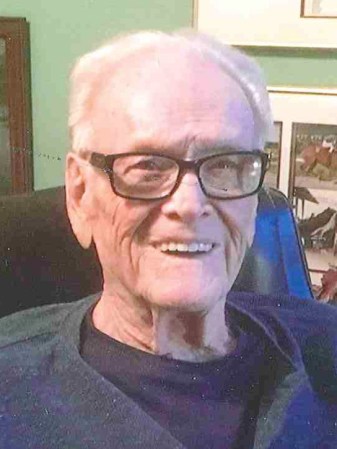 Gary Eugene Peterson, 84, of Austin, MN, died peacefully at home on Monday, May 9, 2022, after a six year battle with Alzheimer’s disease. Gary was born in Austin, MN on April 1, 1938, to Eugene and Mary (Peterman) Peterson, the oldest of two sons. He attended school in Austin, graduating in 1956 and married his high school sweetheart, Judy Mix. Together they had four children.

Gary relocated his family to Southern CA where he was employed by McDonald Douglas, Long Beach, CA as a Contract Administrator for ten years. During that time he remarried and had another daughter, Michelle.

Gary’s love of horses from early childhood led him to start his own business in 1969, transporting race horses throughout the United States. In 1980, he relocated his company from Los Alamitos, CA to Weatherford, TX. He was admired by many for his strong work ethic and steadfast commitment to successfully operate a 24/7 business for 35 years.

Gary enjoyed horse racing both as a fan and as an owner of several race horses throughout the years, starting with quarter horses and later switching to thoroughbreds. He was known for his sharp wit and great sense of humor and loved getting together with his high school buddies and lifelong friends. He was considered to be “one of a kind.”

Gary was preceded in death by his parents, brother, Jack, of Huntington Beach, CA, and special aunts and uncles Bob and Gwen Hahn and Link and Jerry Henry, who helped raise him after his father’s death when Gary was 12 years old.

There will not be a funeral. Gary donated his body to the Mayo Foundation for research. A private celebration of his life will be held at a future date. Memorials are preferred to Alzheimer’s Research or the Mower County Humane Society.

Bonnie Peterson, Gary’s former spouse and long term caregiver, is grateful for the care and comfort given to Gary and her by Mayo Hospice and Dr. Samuel Michel of the Austin Mayo Clinic.