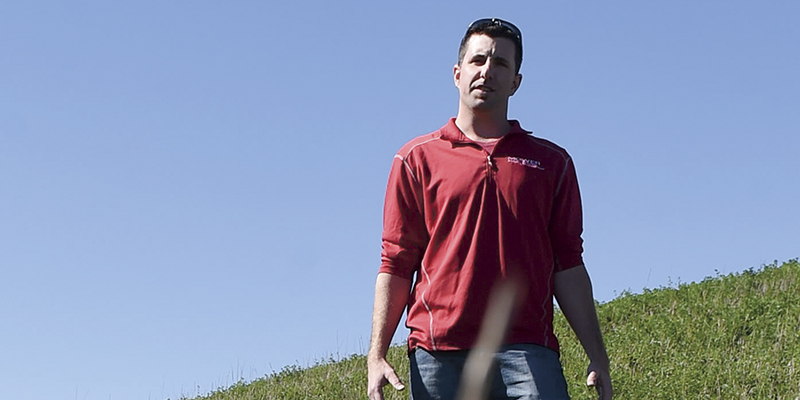 Cody Fox has been named as the new manager for the Mower County Soil and Water Conservation District after its manager Justin Hanson joins a state agency’s leadership team.

Fox, project manager for Mower SWCD and Cedar River Watershed District, will take over the position of district manager on Monday after being selected in late April by the Mower SWCD Board of Supervisors.

“I’m greatly honored to have the support of the board and staff,” Fox said. “Justin did an amazing job throughout his career with Mower SWCD and Cedar River Watershed District, and I will work hard to continue our office’s strong legacy of working with private landowners to get conservation on the ground.”

Mower SWCD also is contracted annually with CRWD to do the work of the watershed district, which started in 2007.

Hanson agreed, saying project landowners and farmers have summed up Fox’s character well with the saying: “He does what he says he’s going to do.”

“We have completed our project plans on time and on budget while exceeding our ambitious goals,” Hanson said. “All of this could not have happened without Cody’s passion, knowledge and credibility. He’s going to be a great leader.”

A native of New Ulm Fox joined Mower SWCD in 2010 and immediately began working with farmers and rural landowners on conservation projects, including grass waterways and basins that control stormwater and sediment. A part-time firefighter in Albert Lea, Fox and his wife, Kelsey, have two children, Levi and Savannah. He’s also an avid hunter and conservationist with his own parcel of hunting land in Mower County.

Since 2016, Fox has led CRWD’s Capital Improvement Plan (CIP) that has led to nearly $7 million in construction of 14 structures. CIP aims to improve water quality and reduce flooding by building large, earthen dams – mostly in the upland areas of the flashy Dobbins Creek watershed –to capture significant amounts of stormwater or snowmelt and slowly release it.

Hanson, who joined Mower SWCD in 2004 right after the Austin area experienced its worst-known flooding, is joining BWSR as the assistant director for field operations. Hanson served as Mower SWCD’s resource specialist from 2004 to 2015, when he replaced retiring, long-time manager Bev Nordby.

Since 2015, Hanson has led both Mower SWCD and CRWD, leading each entity to statewide recognition.

In 2017, CRWD was honored with the Watershed District of the Year Award by the Minnesota Department of Natural Resources at MAWD’s annual conference.  In 2021, Mower SWCD was chosen as SWCD of the Year by the Minnesota Association of Soil & Water Conservation Districts (MASWCD).

Hanson said he always has found something special about working for Mower SWCD.

“It was a great opportunity as I was allowed to chase down grants and do things that maybe were outside of my job description and let me grow into this position,” Hanson said.

Hanson has enjoyed the work in Mower County and Cedar River watershed, especially working as a team.

“They’ve been a great staff, supporting me and letting me lead,” Hanson said. “I’m really excited to see what direction they take when I get out of their way a little bit.”