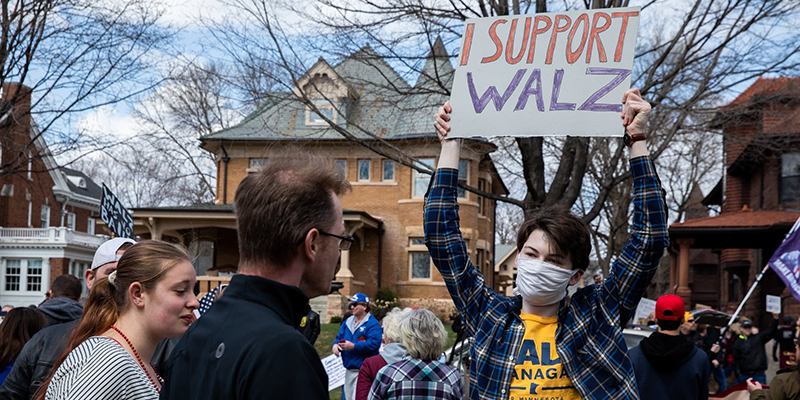 A supporter of the governor confronts protesters during a "Liberate Minnesota" protest in St. Paul, Minn., on Friday, April 17, 2020. Evan Frost | MPR News 2020

The Minnesota DFL Party holds its state convention in Rochester this weekend. Unlike Republicans last week, there are no contested endorsements. The party will endorse incumbents for all of Minnesota’s statewide offices, but those incumbents face stiff challenges in a year when the president’s approval rating is low, and inflation is high.

Midterm elections are historically difficult for the party that controls the White House, but DFL Party Chair Ken Martin contends his party is in better shape than the opposition.

“Republicans would rather be in our position than theirs. I can tell you that,” Martin said, adding that concerns are growing among voters about where Republicans want to take the country.

“People are really starting to see the Republican Party for who they are,” Martin said. “And they are a bunch of right-wing nuts who are marching us towards fascism.”

“President Biden is unpopular, and so that helps Republicans,” Pearson said. “It’s not just congressional Democrats that suffer when their party’s president is unpopular, it’s also state legislators and governors of that same party.”

Minnesota Republicans have plenty of criticism to lay on DFL Gov. Tim Walz. They say he botched the response to rioting and looting in Minneapolis following the police murder of George Floyd. And they contend Walz overreacted to the COVID-19 pandemic by imposing restrictions on businesses and schools that were unnecessary.

Last weekend Republicans endorsed Scott Jensen for governor. The physician and former state Senator fired up Republican delegates over the prospect of stripping Democrats of the governor’s office for the first time in 12 years.

For his part, Walz is painting Jensen as an all-or-nothing extremist unwilling to compromise.

“Compromise is a virtue, not a vice,” Walz said this week. “It becomes very difficult when you don’t just disagree with people, you’re threatening to jail them, you’re threatening to criminalize them. The words you speak and the actions you take can’t be misaligned. And I think that’s a really important piece of this, because it’s very hard to govern if you burn the house down.”

Jensen has repeatedly suggested that DFL Secretary of State Steve Simon should be jailed for his role in easing absentee balloting rules for the 2020 election. Simon has called Jensen’s statements “bizarre and irresponsible.”

Walz goes into his party’s convention well aware of the challenges he and other Democrats face this fall. For more than two years Walz has been defending his pandemic response.

“My job was to use this office and the authority that was vested in me and the best health care guidance to try and put out policies that would save lives,” Walz said in December of 2020 defending his mask mandate.  “This one has been a tricky one.”

While national trends favor Republicans, Pearson said Minnesota Democrats have advantages too, including incumbency and fundraising.

The latest state and federal campaign reports show the DFL sitting on nearly $3 million dollars in cash. The Republican Party’s latest reports show their cash on hand stood at less than  $200,000.

And the recent news that the Supreme Court is poised to overturn Roe v. Wade which would end the national right to abortion will likely cost Republicans in November, Pearson said.

“Nationally and in Minnesota majorities, and sizable majorities, favor maintaining Roe v. Wade,” Pearson said. “And so that while the Supreme Court decision may help the Republican base, it certainly will not help Republicans with independent voters who favor Roe v Wade remaining intact.”