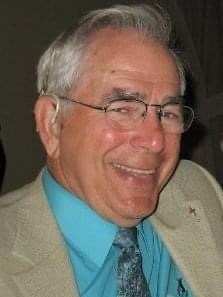 Eugene (Gene) Richard Auringer, age 89, of Austin, Minnesota, went home to Jesus on Friday, May 6, 2022, in Austin. Gene was born on August 1, 1932, in Faribault, Minnesota, to Ralph and Harriet (Harmon) Auringer. He graduated from Faribault High School in 1950 and worked for a year in a shoe store in St. James, Minnesota to earn tuition money for college. He obtained his teaching degree in education from South Dakota State University. Gene taught at the high schools in St. James, Minnesota and Fairfax, Minnesota. In 1963, he relocated to Austin Community College and taught chemistry. Gene married Lois Olson on June 6, 1954, in St. James. They had five children, Brian, Gail, Mark, Lynn, and Jason. Gene sang joyfully in the church choir for 50 years. He also sang with the Northwestern Singers for many years. He shared his love of music with the entire family. Gene enjoyed tending his roses and calla lilies. He coached wrestling and football and was very fond of many sports. He was well-known for his spoonerisms and love of rhyme. One great grandchild was asked what he remembered about Grandpa Gene, and he said, “He plays cribbage, he wins cribbage, and he shouts Aaamen after prayers!” Most importantly, he had an unwavering faith in Jesus Christ, which he shared with those around him. Gene was generous with his time, talent, and treasures and he was the epitome of Christ’s love for the church and his love for his wife.

A funeral service will be held at 11:00 a.m. on Friday, May 13, 2022, at St. John’s Lutheran Church in Austin. Visitation will take place from 4:00-7:00 p.m. on Thursday, May 12, at Worlein Funeral Home in Austin and will continue for one hour prior to the service at the church on Friday. Interment will be in Oakwood Cemetery, Austin. Worlein Funeral Home of Austin is assisting the family with arrangements. Condolences may be expressed to the family online at www.worlein.com.