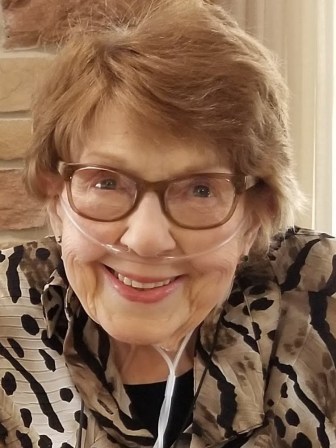 Eileen Hannah Majerus, 90, of Austin, passed peacefully from this world to her eternal home on Sunday, May 1, surrounded by her children and lifted by love.

Eileen was born May 19, 1931, in Saint Paul, MN, to Harry and Irene (Muzyk) Frandle. When her father lost his job during the Great Depression, he moved his family to Blue Earth to live with relatives. Eventually, he found work at Hormel in Austin, and the family settled there.

Eileen graduated from Saint Augustine High School (now Pacelli) in 1949. She married Don Majerus in 1953 and moved to Austria briefly when Don was stationed there in the Army. Back in the states, Eileen and Don started their family – which would grow to include seven children — and made their life in Austin.

Eileen held a variety of positions during her working career, most of them centered on caring for others. She worked as a dental assistant following high school, but when she and Don started having kids, she stayed home to care for them. When the kids were school age, to make ends meet, she went back to work. She worked the overnight shift at Gerard School, then came home to a houseful of children — often only getting a few hours rest each day. Later, she worked as a home health aide. In the 1980s, she worked as Parish Secretary for Queen of Angels Catholic Church, a position she held until her retirement.

Throughout her life, Eileen worked tirelessly for the things she cared about — first and foremost, her family. With seven kids and a limited budget, she was creative and resourceful in finding ways to meet the needs of this growing family and at the same time somehow cobble together a beautiful home.

Eileen cared deeply for people and had a tremendous capacity to love. She held people’s gaze with her bright eyes and always made you feel like you were the most important person in the room to her. She was a kind woman who treated people with dignity and respect, a warm smile and encouraging tone.

She was a serial volunteer, always looking for ways to contribute and make a difference in the lives of others. During her term as President of the Saint Olaf Hospital Auxiliary, she made such an impact that the hospital administrator asked her to attend monthly board meetings. She also volunteered and held leadership roles in Queen of Angels Rosary Society/CCW, Birthright, Brownies, Cub Scouts, and other organizations.

Though Eileen didn’t earn a college degree, she was a smart, curious, life-long learner. During her life, she amassed her own small library of books — she was interested in so many things! She was also very creative and had an abundance of raw artistic talent that she fed with classes, craftwork, and projects throughout her life.

Eileen had a special place in her heart for her classmates from St. Augustine Class of 1949 and attended reunions whenever her health allowed, including the 73rd Class Reunion last October.

For the past four years, Eileen resided at Comforcare Good Samaritan after suffering broken bones in a fall. Although she would have preferred to live in her own home, like everything else in her life, she made the best of her situation. She made her nursing home room look like a warm and welcoming living room. She made a point to learn the names and get to know the people who took care of her. Eileen’s family would like to thank all the nurses, aides, and other staff who cared for Eileen and loved her, she considered many of you her friends, some of you her family. We will be forever grateful for all of you, particularly her special angel, Genely, and kind friend, Atanus.

She was preceded in death by her parents; her husband Don Majerus; sisters Janet Caron and Helen Roe; brothers Bob, Richard and Jim Frandle; and sister-in-law Doris Frandle.

Eileen died as she lived – with grace, love, and faith. Through all her trials in life, she never lost hope because she believed in God’s loving mercy. During the three days she was finishing her earthly life, all seven of her children and other family members took turns being with her, and she talked with each one of them. As one of her grandsons said goodbye to her a few hours before she died, he said, “Grandma, I’m heading out.” She looked at him and said, “I’m heading up.”

Rest in peace, Mom/Grandma. We love you forever.

A Funeral Mass will be at 11:00 a.m. Friday, May 13, 2022 at Queen of Angel Catholic Church, Austin, MN with a visitation one hour prior to the service. A Rosary in Eileen’s memory will be recited starting at 10:00 a.m. Father Raul Silva will be officiating. Interment at Calvary Cemetery.

In lieu of flowers, please do a random act of kindness in Eileen’s memory and/or make a contribution to Queen of Angels parish in Austin.