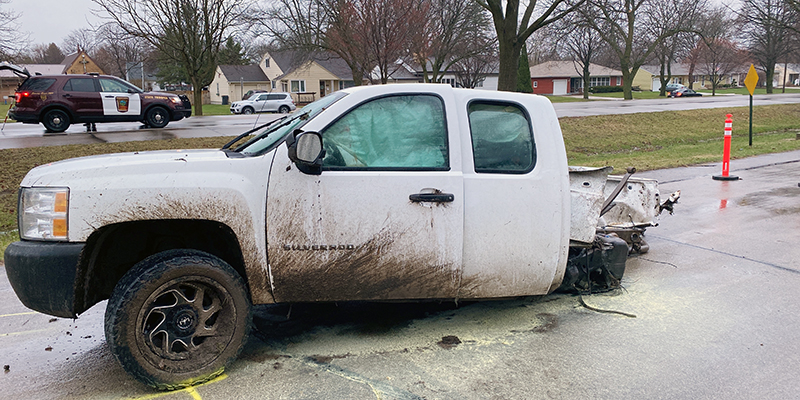 The remains of the vehicle invovled in a brief chase early Sunday morning. Photo courtesy of the Austin Police Department

The driver of a truck involved in a fiery, early-morning crash Sunday, made his first appearance in Mower County District Court Wednesday.

Melchor Barnabas, 23, of Austin, is facing one count of felony fleeing a peace officer and five misdemeanors related to the crash, including DWI and open bottle.

The crash took place around 3:20 a.m. Sunday morning, on Oakland Avenue West and resulted in a large part of the Chevrolet Silverado Barnabas was driving being sheared away after hitting a tree. The rest of the truck came to a stop several feet away near St. Edwards Catholic Church.

The truck then caught fire and Barnabas had to be extradited from the vehicle while still ablaze.

According to the court complaint, the incident started when an Austin Police officer came to the intersection in the 100 block of Main Street South. 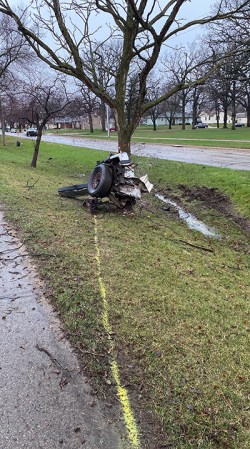 Part of the vehicle that was sheered off. The rest of the vehicle can be seen on the frontage road next to Oakland Avenue West. Photo courtesy of the Austin Police Department

During this time, given the timing of the lights, the officer determined that the truck either ran the red light or stopped as if it was a stop sign before continuing on, still with its high beams on.

During the time he was being followed, the officer noted the truck serving and crossing the centerline. The officer pulled over at Second Street and let Barnabas pass him, before pulling back out and following the truck, which continued driving down the center of the road.

The officer turned on his lights with both vehicles traveling around 22 mph, however, just after the lights were engaged, Barnabas began accelerating. The officer radioed dispatch to report the vehicle was possibly fleeing from him.

The truck continued swerving around Sixth Street and was estimated to have been traveling between 45-50 mph, but tapped the brakes as if pulling over. However, Barnabas veered back to the south lane of Oakland and continued westbound at around 50-55 mph. The officer tried to get a read of the license plate before disengaging, but as he was calling in the information, Barnabas again accelerate and increased distance.

With no safe way to catch up to the vehicle the officer disengaged the pursuit. When Barnabas was passing by the tennis courts at Wescott Athletic Complex, it was estimated that he was traveling at speeds over 70 mph.

Barnabas nearly missed broadsiding a vehicle and at the intersection of 14th street, Barnabas tapped the breaks and blew through a red light, just missing an unoccupied vehicle.

Just after the intersection, Barnabas veered south and was heading toward Banfield Elementary before overcorrecting and cutting back across lanes of traffic to the northwest where he left Oakland and struck the tree.

The officer observed the truck catch fire after the crash as well as a line of gas nearly 100-200 feet long set on fire.

The officer tried to see if anybody was still in the vehicle, and seeing nobody began searching on the possibility Barnabas had been ejected. After another officer showed up, they found Barnabas still in the vehicle with his head under the passenger side dashboard. Both officers were able to extract Barnabas, but when they did they noticed a beer can fall out.

Barnabas, who was unconscious when pulled out, had a large laceration on his head, which was bleeding profusely. He gained semi-consciousness, but was largely unresponsive, however, he was able to give officers his name and date of birth.

Barnabas was taken to Mayo Clinic Health Systems-Austin where a search warrant was issued and blood drawn.

On Monday, officers made contact with the registered owner of the vehicle, who identified himself as Barnabas’ cousin. He had indicated that he had gone to take a shower and when he got out Barnabas and the truck were gone.

The cousin indicated that Barnabas did not have permission to take the vehicle and advised there was no insurance on the vehicle.

Barnabas was taken into custody later that day at his home. His next court date is May 16.