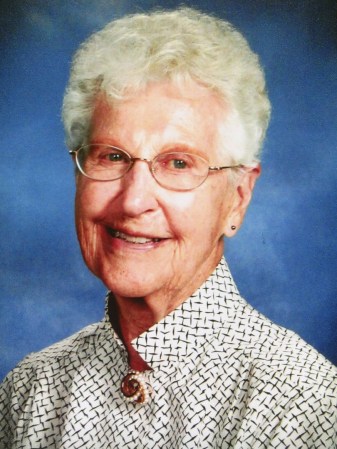 Memorial Services for Dorothy Frances Vandersnick will be held on Saturday, June 4, 2022, at 10:30AM at Bonnerup Funeral & Cremation Services in Albert Lea. A visitation will be held one hour prior to the service. Inurnment will be held at a later date at St. Rose of Lima Catholic Church Cemetery in Garretson, SD.

Dorothy passed away on Wednesday, May 25, 2022, at the Woodlands at St. John’s with family by her side. Dorothy was almost 101 years of age. She was born June 29, 1921, in Garretson, SD on the family farm to Matt and Frances (Kuhl) Schreurs. Dorothy attended country school through the 8th grade and graduated from Garretson High School in 1941. Following graduation, Dorothy worked for The Argus Leader newspaper in Sioux Falls, SD.

Dorothy married Don Vandersnick after WWII on February 7, 1946, at St. Rose of Lima Catholic Church in Garretson, SD. To this union four children were born. While residing in SD, they owned and operated a trucking business and also farmed on the side. The family resided in Garretson, SD, until 1961 when they moved to Albert Lea, MN to purchase the Stables Supper Club. Eventually they purchased the Standard Truckstop Café in Albert Lea and the Standard Truckstop Café in Cannon Falls, MN. They retired in 1974. The whole family was involved in the operating of these three businesses.

She and Don enjoyed trips to Hawaii and many summer months at various lakes in Northern Minnesota with “happy hours, hors d’oeuvres” and many fish fries. Lots of memories and fun times were had by all their children, spouses and grandchildren.

We want to thank the St. John’s staff at the Meadows and the Woodlands for their wonderful care of our mom for the past year. To the Mayo Hospice for their loving end of life care.