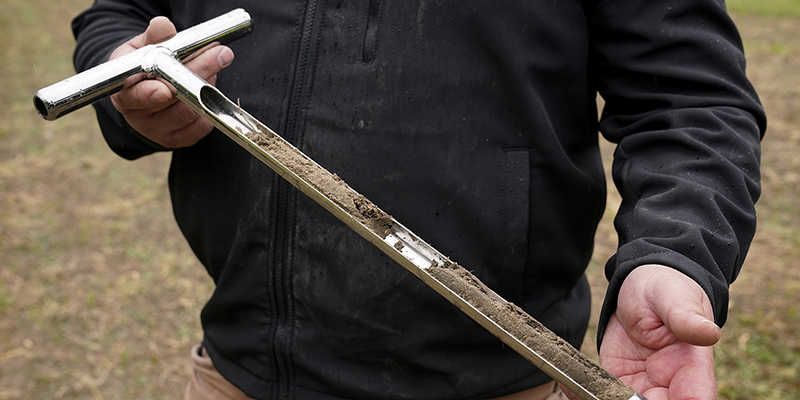 Jason Ribbens, precision agronomy specialist at Landus, holds a soil sample at Water Works Park, Tuesday, May 24, 2022, in Des Moines, Iowa. Des Moines Water Works has for years engaged in a bitter struggle to clean up drinking water that comes from rivers teeming with agricultural pollutants, resorting to filing lawsuits, proposing legislation and even public shaming to force farmers to reduce runoff from their fields. None of it worked, so now they are trying another approach -- inviting farmers to learn the latest techniques for reducing pollution at riverfront plots of corn and soybeans in the sprawling park where the utility filters the city's drinking water. (AP Photo/Charlie Neibergall)

DES MOINES, Iowa — A Des Moines utility has for years engaged in a bitter struggle to clean up drinking water that comes from rivers teeming with agricultural pollutants, filing lawsuits, proposing legislation and even public shaming to try to force farmers to reduce runoff from their fields.

None of it has worked, so Des Moines Water Works is trying a less combative approach — inviting farmers to learn the latest techniques for reducing pollution at riverfront plots of corn and soybeans in the sprawling park where the utility filters the city’s drinking water.

“I think it’s great to have the farmers out here and show what can be done,” said Jessica Barnett, who oversees management of the 1,500-acre (2.3-square mile) park little more than a mile from downtown.

It’s a surprising turn in a long-running dispute between the state’s dominant industry and a utility that supplies drinking water to 600,000 customers in Iowa’s largest metro area.

Des Moines Water Works has complained for years that nitrates and phosphorous from farm fertilizers pour off fields, leaving rivers so polluted that the utility fears even its sophisticated and costly equipment can’t purify the water. The utility’s efforts to hold some upstream counties legally liable for the pollution have failed, and Republicans who control the legislature and governor’s office have repeatedly rejected regulation, instead supporting voluntary programs too limited to result in real improvements.

That history makes the deal between Landus, the state’s largest farmer-owned grain cooperative, and Water Works all the more surprising. Or as Matt Carstens, the president and CEO of Landus, put it: “This is an unlikely partnership.”

In some ways, Carstens and Water Works CEO Ted Corrigan said the new initiative is possible only because the earlier, more confrontational approaches failed.

“Whatever we’ve tried in the past hasn’t been as successful as this could be,” Carstens said.

Under the plan, Landus has planted corn, soybeans and a cover crop of rye and red clover on three plots totaling about 12,000 square feet (1,100 square meters) near a bend in the Raccoon River that, along with the Des Moines River, meets the city’s water needs.

Landus plans to bring in about 500 farmers through the summer to examine the plots and learn how they can confidently scale back their use of fertilizer, with more advanced monitoring and by planting cover crops that grow alongside the main crop and naturally infuse the soil with nitrate.

Dan Bjorkland, a soil expert at Landus, said he’s especially hopeful the company’s efforts will encourage more planting of cover crops, now used by less than 10% of Iowa farmers despite the clear benefits in preventing erosion and creating healthy soil. Some farmers might be more willing to consider planting cover crops because fertilizer prices have reached record highs due to the Russian invasion of Ukraine, which disrupted supply chains.

“We have the technology today in agriculture to apply exactly what you need,” Bjorkland said. “I call it the Goldilocks method of nutrient management. You don’t want too much but you have to have enough to get the production you need.”

Jeff Frank, a corn and soybean farmer from northwest Iowa who attended a presentation on the new effort last week, said farmers used to be encouraged to apply more fertilizer than needed to ensure they had enough.

“We were coached that way, to put down a little extra, to have a little in the bank,” Frank said. “The technology has come a long way and that isn’t the case anymore.”

Corrigan, of Water Works, said he’s hopeful the demonstration plots along with other efforts by local governments to build streamside buffer zones will pay off in cleaner water. Corrigan also credited Landus for acknowledging that large-scale agriculture needs to take a lead in cleaning up Iowa’s waterways.

But Corrigan said he still believes some form of increased regulation is needed to significantly reduce runoff from the state’s roughly 85,000 farms.

“I don’t think it can be done without some sort of legislative action that sets minimum expectations and what we’re doing now is to show it can be done. Ag and clean waterways can coexist,” he said. “And maybe someday the Legislature will see it can be done and say, everyone needs to do it.”