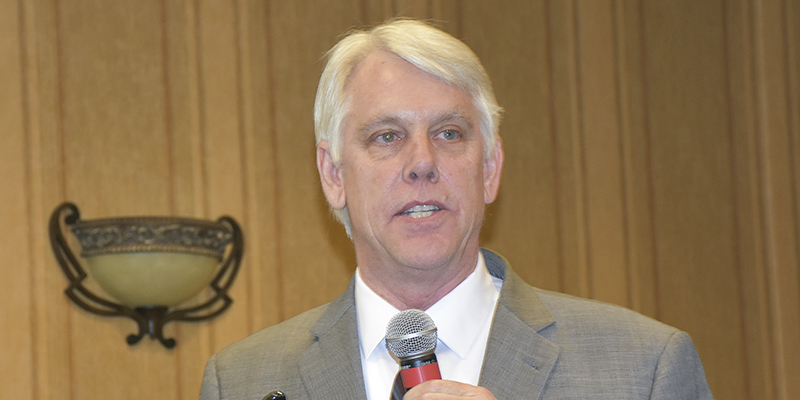 The Development Corporation of Austin held its annual meeting on Tuesday at the Hormel Historic Home.

During the event, general business was conducted, but President and CEO John Garry also gave an update on the business environment in Austin.

And that outlook is pretty good.

“We have every reason to feel good about our community,” Garry said Tuesday.

In particular, Garry was referring to advancements in the manufacturing industry, including the new Nu-Tek BioSciences, LLC complex that continues on scheduled on the city’s north side.

Nu-Tek’s addition goes hand-in-hand with the city’s desire to build up businesses in the three areas that make Austin strong.

“Food, ag and bioscience — that kind of converges on those kinds of things happening,” Garry said later in the week. “Now they’re paying more attention to each other. We have major strengths in those three areas.”

Those attending the meeting also received an update from Dr. Brian Buhr, dean of the University of Minnesota’s College of Food, Agricultural and National Resource Sciences.

That update specifically centered on the proposed Future of Advanced Agriculture Research in Minnesota (FAARM) complex, that if gets the go-ahead would advance farming in the area in multiple areas and be based in Mower County.

However, nothing is guaranteed yet, as the University of Minnesota and other entities await confirmation from the Minnesota Legislature on whether or not they would provide the $60 million requested to help with the $250 million project.

The U of M has already committed to the project as well as The Hormel Foundation, which is guaranteeing an additional $60 million.

“There’s a lot of support for (FAARM),” Garry said. “The Foundation is supporting it, the U has prioritized it. I think that $60 million from the state legislature is super important to get that support.”

Either way, the overarching message from Tuesday’s meeting is that business is sitting solid in Austin.

“It’s definitely on the upswing,” Garry said. “I think the number of developers and people looking to deploy capital in higher potential places are more interested in Austin than I’ve experienced since coming to the DCA in 2008.”

— Crystal Miller contributed to this story.