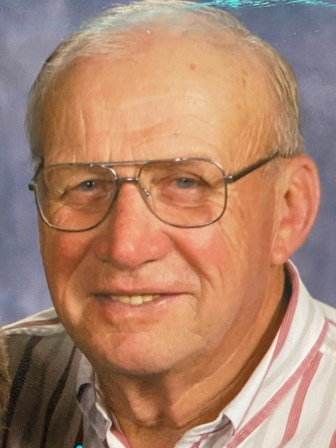 Dale was born on June 15, 1933, to parents Arvid and Clara Mae (Peterson) Anderson, in Bancroft Township, MN. Dale was the second of four boys. He graduated from Blooming Prairie High School in 1951. After graduation Dale worked in farming, construction, and enlisted in the Army in 1954. He spent two years serving, stationed in Germany. He was also able to visit relatives in Denmark during that time and had wonderful stories to share about his adventures.

On September 4, 1959, Dale married Ann E. Hansen in Rochester, MN. Shortly after they relocated to Geneva Township where they spent many years farming and raising a family. Together they raised 5 children.

Once settled on the farm, it was rare to find Dale too far from home. He was committed to sustainably building his farm, taking care of the hogs, and all the other projects necessary to nurture a family farm. He farmed in partnership with his brother, Wimp, until his death in 1992. Not only did he have a love for his family, animals, and his farm, but Dale also served his community in many ways. Until his passing, he was on the Geneva Township Board where he served for over 30 years. Previously he was part of the Lions Club in Blooming Prairie and on the board at Community Lutheran Church in Geneva. He was also an avid RC plane builder and pilot and was a member of the Freeborn-Mower Radio Control Flyers, serving as Secretary (if you’d seen his spelling, you’d question that appointment!) He was also active in mowing and maintenance of the club flying field. After retirement you could still find Dale farming, just on a smaller scale–field corn to feed the squirrels and birds, sweet corn to share, pumpkins and gourds for the grandkids, and plenty of tomatoes.

A service is planned for June 26, 2pm, at Community Lutheran Church in Geneva, MN