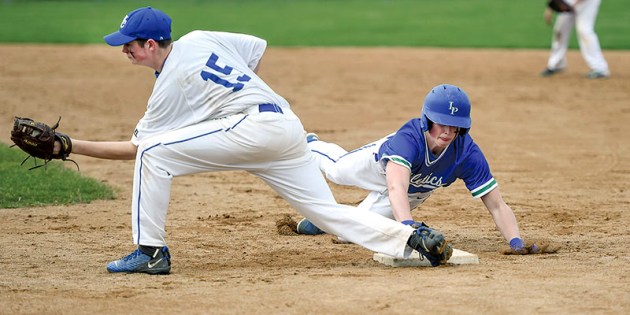 Lyle-Pacelli’s Landon Meyer dives back into first on a pick-off attempt against Mabel-Canton Thursday night at Marcusen Park. Eric Johnson/photodesk@austindailyherald.com 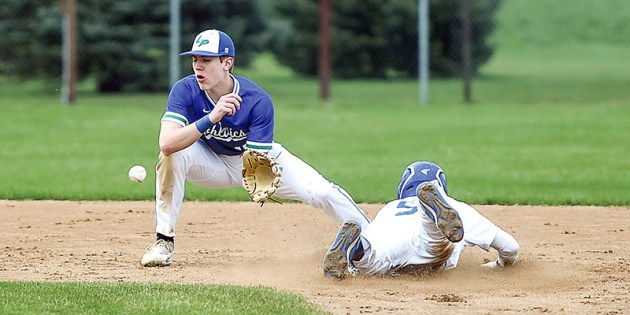 Lyle-Pacelli’s Mac Nelson awaits the ball on a stolen base attempt against Mabel-Canton Thursday night at Marcusen Park. Eric johnson/photodesk@austindailyherald.com 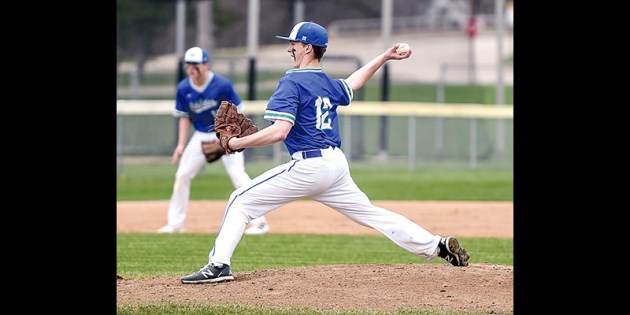 The Lyle-Pacelli baseball team couldn’t catch a break in any way as it lost to Mabel-Canton 4-0 in Marcusen Park Thursday, just one week after it had beaten the Cougars 15-5.

The Athletics (6-3 overall) out-hit MC 9-5 and they made contact in most of their at-bats, but they weren’t able to produce any runs.

“We hit everything hard, it was just right at them,” L-P head coach Brock Meyer said. “I don’t know. It was just one of those days in baseball. They didn’t walk anybody and they made the plays when they needed to.”

L-P loaded the bases with two outs in the seventh after Mac Nelson and Hunter VaDeer had back-to-back clutch singles, but Jake Truckenmiller popped out to end the game.

Dane Schara scattered five hits and three earned runs, while striking out six in seven innings, but it wasn’t enough as L-P’s offense wasn’t able to produce any rallies.

L-P had runners on first and third with two outs in the fourth inning, but Jack Klingufs grounded out to end the threat. The Athletics also had a runner thrown out at home in the second inning.

The Cougars (2-5 overall) scored in the first inning off a single, an error and an RBI groundout and they scored off a single and a sacrifice fly in the third.

L-P had two costly errors and Schara walked four in the loss, while the Athletics drew just one walk.

“Walks and errors will hurt you. That’s what we’ve talked about all year,” Meyer said. “Walks to the top of the order hurt and you’ve got to attack those guys.”