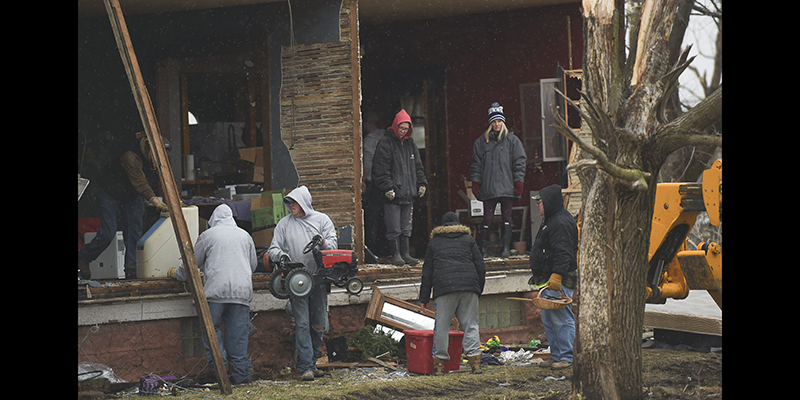 Mower County commissioners on Tuesday morning got a broader look at the days following the April 12 tornado, which took half of Taopi during a four-mile long rip through Mower County.

Emergency Manager Amy Lammey, along with Mower County Sheriff Steve Sandvik and Deputy Dave Pike, led commissioners through a presentation of the behind-the-scenes clean up and assessment from the storm which took with it 10 homes in the tiny community between Adams and LeRoy.

Lammey also updated commissioners on the current stats from the National Weather Service and said that there was some talk that the EF2 tornado might be upgraded to an EF3 based on damage reports coming in.

Miraculously, nobody was killed and only two suffered injuries when the house they were in was lifted off the foundation. Both occupants had to be rescued from the home with one suffering serious injuries.

The three on Mower County’s Emergency Management Team lauded all of those who took part in clean-up in the days following storm who contributed to getting the town back on track so quickly.

This included Mayor Mary Huntley, who based a supply pantry out of her own garage and also hosted the nightly community meetings at her home that brought everybody up-to-date on where things stood.

“Right from the start she stood out and spoke to the people in her town,” Pike said. “She did a phenomenal job in rallying the troops.”

What’s stood out is how quickly the clean-up went, including more infrastructure work on roads in the community that weren’t designed to put up with the heavy machinery used in the days following the storm.

“There’s been a lot of clean-up, a lot of good things going on,” Lammey said.

Before their presentation, the County Board approved waiving the $750 septic systems compliance inspection for those homeowners who are going to build back on a 1-to-1 basis.

However, this will only apply to homes in Taopi that in 2007 installed septic systems as part of a 2007 community septic project.

Two homes were damaged outside of Taopi and their systems are much older having been installed in 1959 and 1960, however, options are on the table, including low interest loans, to help possibly alleviate strains from the storm.