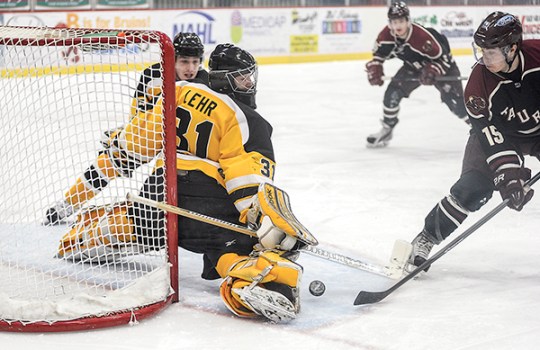 The Austin Bruins announced on Monday that the team has hired alumni goaltender Nick Lehr as goaltending coach, following the departure of Cory Lonke last week.

Lehr, 29, played for the Bruins for three seasons from 2011 to 2014 and returns for his second stint as goaltending coach after previously serving in the role for the 2018-19 season. Lehr also served as the goalie director with the Beijing Junior Kings in Beijing, China, as part of the Los Angeles Kings Goalie Development Program from 2019 to 2021.

Prior to joining the Bruins in a coaching capacity, Lehr played four seasons at the University of Minnesota where he graduated in 2018 with a degree in Business and Marketing Education. The Roseville native is the most decorated goaltender in Austin Bruins history having played three years in a Bruins uniform between 2011 and 2014. He currently holds team records as a Goalie in appearances, minutes, fewest goals allowed, and wins in a season.

“We are very excited to have Nick back on our coaching staff,” stated Bruins head coach and general manager Steve Howard. “When he was previously here he helped goaltenders, Kyle McClellan and Brett Miller, earn their commitments to an NCAA Division-I school to continue their Hockey Careers.”

Howard and Lehr have known each other since Lehr’s high school days and have worked together during off-seasons at the Minnesota Advancement Program (MAP) and MEGA Goaltending. Lehr has been associated with the Blaine-based goaltending program since the beginning of his playing career and has been coaching on and off since high school.

“It is an honor to be welcomed back to Austin and I couldn’t be more excited to contribute to an organization and city that did so much for me in the past,” said Lehr. “Having played in the NAHL, I will use what I went through as a tool to help the Bruins goaltending. Success is a standard within the Bruins organization, as well as moving players on to the collegiate level, and Austin offers that opportunity to those who pursue with passion and work ethic.”