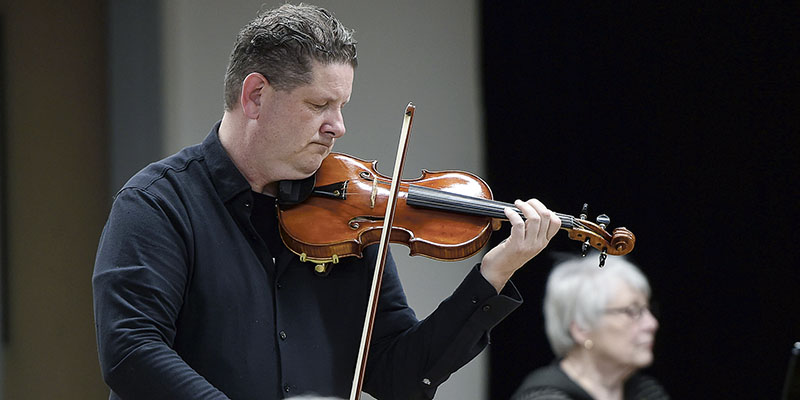 To those who knew Blair Lawhead, he was an energetic supporter of music and those who took part in musical endeavors.

Those attributes were on display Thursday afternoon during the dedication of The Blair Lawhead Music Commons in the Austin High School annex.

Lawhead passed away unexpectedly on March 14, 2018, but his legacy continued long after. The remembrances during the dedication were rich and meaningful and wove a story of the love and spirit Lawhead lived with each day. 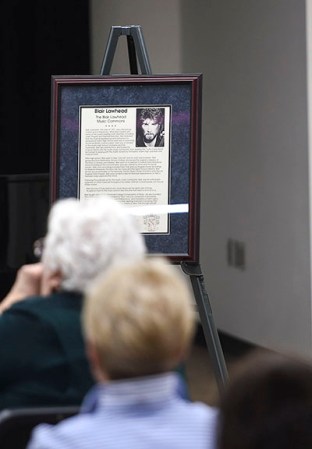 The plaque that will hang in The Blair Lawhead Music Commons. Eric Johnson/photodesk@austindailyherald.com

“You are the people that meant the most to him,” Brandon Lawhead told those in attendance Thursday through tears. “If he was here he would be conveying his gratitude to you. You meant so much to him.”

Blair Lawhead was a musical prodigy during his time at AHS and that carried on with him after graduation. He was a Broadway violinist and played in a number of nationally-recognized things, including Barbara Streisand’s “The Mirror Has Two Faces” and “Higher Ground” albums.

“He was a big thinker,” Brandon said. “There came a time in high school where he would think big things like, ‘I want to be the first person to win the concertmaster seat as a sophomore.’”

Blair’s former AHS music teacher Dick Larson remembered Blair as a student in a tireless pursuit of greatness and more often than not people would go with.

“He would set a path and other people would follow,” Larson said. “He was an icon.”

For those sitting in on Thursday’s dedication, the moment felt light with the knowledge that Blair’s example could now be read by students of today, who may follow in the same footsteps he did.

“I’ve tried, with Blair’s concerts, to execute on things we discussed about handing things off to the next generation,” Brandon said, referring to the series of concerts in Blair’s name that raises money for the AHS music departments.

Regardless of the joy felt Thursday, however, it can’t take away the legacy that was cut too short.

“Blair left us too early,” Larson said. “He had so much to give.”