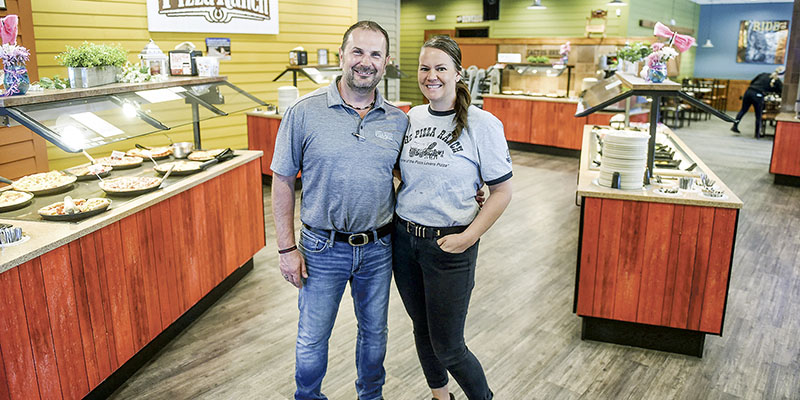 John and Trisha Tietje, store part owners of Pizza Ranch in Austin and Albert Lea, are now planning to expand the Austin location to include a FunZone arcade. Eric Johnson/photodesk@austindailyherald.com

The couple took over the part ownership of both Austin and Albert Lea locations at the start of the year and began making small changes here and there to make the visitor experience that much better.

However, another  bigger change is coming soon that will heighten the family experience at the restaurant.

Plans are in place to begin construction this summer on 4,000 square feet in order to add an arcade, called the FunZone, that Austin has not seen the likes of.

The plans call for 40 games that include both virtual reality and 3D machines.

Pizza Ranch in Austin will be adding the FunZone to its store this year, including 40 arcade machines. Eric Johnson/photodesk@austindailyherald.com

“They’re pretty impressive games,” said John, who is the district manager of several area locations. “We’ll be one of the top five Pizza Ranches in the country. The fifth largest. We’re gaining 70 seats and will have party rooms people can book out for birthday parties.”

The Tietje’s have been with Pizza Ranch for over 10 years and are part of a larger franchise group that owns 24 stores in the region.

Having lived in the area for so long, the couple feels that the FunZone will add a family element the community has been looking for.

“It’s very exciting,” said Trisha, who is general manager of the Austin location. “I think it’s nice to bring another dimension to our store locally and the community at large. Provide them more options for family and entertaining.

Pizza Ranch will be expanded in two directions. The FunZone expansion will be built into an existing space to the east and will be visible as soon as people walk in.

A storage area for equipment will be added to the north, again into existing space that used to be the old Cash Wise building.

The storage will be important to keep spare parts on-site, which in turn will be used by an employee that will be trained on how to service any machine that breaks down on site.

The expansion will also mean the hiring of new staff to the tune of around 12-15 employees to add to the 30-35 already working at Pizza Ranch.

“We have a great staff here,” John said. “It’s a breath of fresh air working on this one. Even on a  bad day it runs well.”

The ability to turn this kind of project around has been helped by the fact that they work for a company that supports its store owners.

“It’s a great company, a good company to work for,” John said. “They are Christian based and they live it.”

There are no plans currently to do the same for the Albert Lea store, though the couple said they were open to the idea if the right opportunity presents itself.

For the time being, they are concentrating on giving diners a reason to not only stay in town for family fun, but to provide them with the best dining experience possible.

“This is going to provide something,” Trisha said. “They leave for a bigger town. How about we stay in town?”