3 honored for induction into AHS Music Hall of Fame 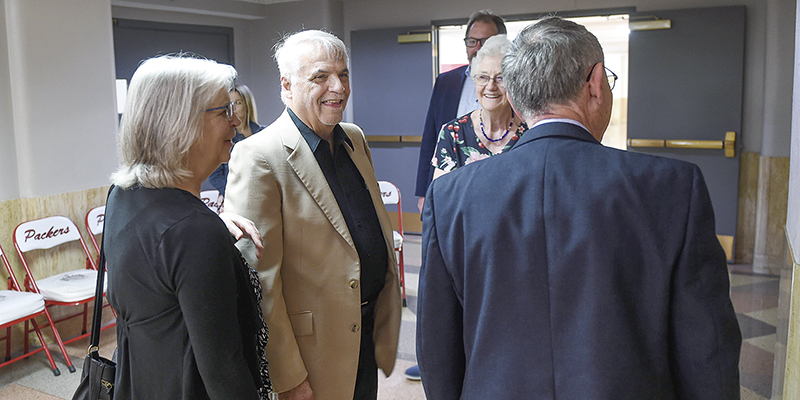 John Madura, one of three being inducted into the Austin High School Music Hall of Fame, center, talks with members of the Hall committee Wednesday afternoon. Eric Johnson/photodesk@austindailyherald.com

Three of the latest additions to the Austin High School Music Hall of Fame were recognized Wednesday afternoon during a day of activities.

John Madura, Brenda Borchardt Ehrhardt and Lowell Pickett are the latest additions to the hall, which celebrates the strong musical traditions the school has fostered throughout the years.

“It was just incredible,” Borchardt Erhardt said before a tour of AHS’ new music headquarters within the Annex building. “If I hadn’t had that experience I never would have gone into music education.”

Brenda Borchardt Ehrhardt, right, listens during a tour of the choir room in the Annex Wednesday night. She was one of three inducted into the Austin High School Music Hall of Fame. Eric Johnson/photodesk@austindailyherald.com

Borchardt Ehrhardt graduated in 1973, and eventually went on to teach instrumental and vocal music starting in McCall, Idaho, followed by a stint in Sandy, Oregon.

She also taught elementary music in a variety of locations including military families in Germany. Not just a teacher, Borchardt Ehrhardt also played in a number symphonies starting in college and continuing after she left school.

“The love of music is alive today,” she said, emphasizing the importance music has played in her life.

Madura was also in Austin to be honored Wednesday. Madura was a standout not only in music, but swimming as well where he was a diver for the Austin Packer swim team. He would oftentimes wearing his swimsuit to band practices so he could go straight to diving.

“I took my first lessons in the first band room,” Madura remembered. “I would come in my swimsuit because I was passionate about both things. Both were a big part of my life.”

Madura graduated in 1965 and went on to study cello after college with Robert Jamison of the Minnesota Orchestra.

He has been a private cello instructor since 1967, and directed the Mounds View Public Schools Orchestra for 44 years. Madura also participated in several orchestras and amassed several honors along the way.

“We just did what we did,” Madura said simply. “I just met some really good musicians. It was something I really strove for.”

Pickett graduated just two years after Madura in 1967, and after college went on to found the nationally-known Dakota Jazz Club in Minneapolis, programming its stage for 27 years.

On Wednesday, the honorees and those others in attendance met in front of the display that houses portraits of all 35 people who have been inducted to date at Austin High School.

After a tour of the Annex and the MacPhail Center for Music, all retired to a banquet for the inductees at the Hormel Historic Home with the night coming to a close at the AHS Choir Concert.

According to those who help pick the inductees with the Austin Public Education Foundation and the Austin High School Music Hall of Fame, each inductee is a representation of the musical heritage at the school.

“I think it just says that there has been a history of music teaching,” said board member Sue Radloff. “These people are so motivated to excel in their field.”