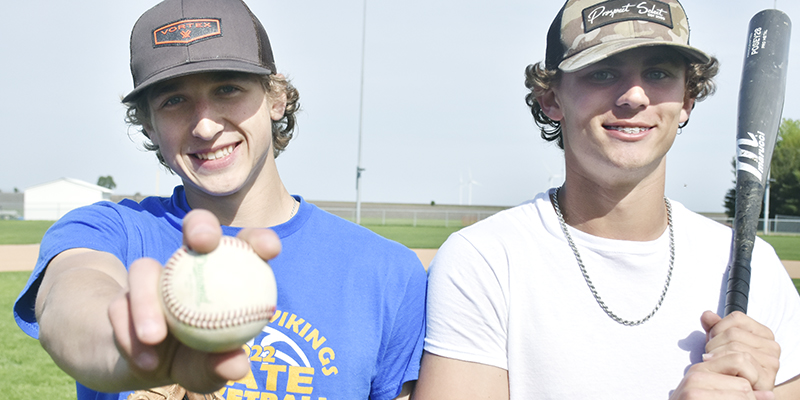 Nolan Klocke has served as Hayfield's ace pitcher this season, while Easton Fritcher has shored up the defense at shortstop and led the offense with his bat. Both players have been big leaders for the Vikings this spring. Rocky Hulne/sports@austindailyherald.com

HAYFIELD — It’s not always the path you take that matters. It’s where you end up.

A pair of Hayfield’s top baseball players have taken vastly different routes to success, but seniors Easton Fritcher and Nolan Klocke are both slated to play college baseball and they were both named to the Minnesota Baseball Coaches South All-Star Team recently.

How they finish their high school career will have a big say on whether or not the Vikings can repeat as Class A champs.

Fritcher, a University of Minnesota commit, is a natural athlete. He was an All Conference baseball player as an eighth grader and he was a fixture in the lineup for the Hayfield boys basketball team that won the past two state titles. He was also the winning pitcher in the Class A state baseball title game in 2021.

Quite frankly, Fritcher has done a lot of winning. Headed into this weekend, the Viking baseball team has been 43-2 over the past two seasons and the Hayfield boys basketball team has gone 53-6 overall.

Fritcher has played a big role in most of those wins and the last two years have flown by fast for him.

“It says something about our coaches. They always let us celebrate, but they never let us get too high. We have some pretty humble guys here and I don’t think any of us go around saying how many championships we have,” Fritcher said. “We’re very happy and thankful for everything that’s happened, but we all know that it’s not done until it’s done. We’re going to have to beat some pretty good teams if we want to repeat in baseball.”

Fritcher is in the conversation for the best athlete in Hayfield history as he did all of the dirty work for the Viking basketball team, while also being a capable scorer. In baseball, he served as Hayfield’s best pitcher, hitter and defensive player. His pitching was limited due to an injury this season, but Fritcher moved in from center field and slid into the shortstop role to give Hayfield’s defense a boost.

Fritcher’s talent is matched by his fire. He has never settled on just being the best player in town and he’s always tried to push his teammates to higher levels along the way, even if it means partaking in a bit of trash talking during a heated practice.

“It’s how I was raised. My parents both compete and we always want to be the best,” Fritcher said. “But one player can only do so much. I push my teammates and I love helping out guys.

Those are my dudes, and If I can help them out in any way, that’s great.”

“Easton was always stronger, bigger, faster than everyone. He played two ages up when he was younger and he always wanted to be better than the older guys,” Krekling said. “He’s just a stud athlete and he can play any position. He’s by far our best option at shortstop, even as a left hander.”

Klocke recently uncovered an item that blew his mind. It was a sixth grade time capsule that listed him at four-feet, nine inches tall and 70 pounds soaking wet — not exactly a kid who was destined for athletic greatness.

But Klocke has grown quite a bit over the last year and he is now Hayfield’s de facto ace pitcher with Fritcher being off the mound for most of the spring. Klocke, who has committed to play baseball at Luther College, was a solid pitcher on last year’s team, but this year he has taken it to a new level.

After a bit of a growth spurt and a new commitment to the weight room, Klocke brought his fast ball from 77 miles per hour to 85 miles per hour.

Klocke, who was a reserve player on the state champion basketball teams, has not always been in the spotlight like Fritcher, but he never doubted that his time was coming.

“Seeing that time capsule was unreal to me. I can’t believe it. I knew eventually it would come, but I thought it would be sooner. Now that it’s here, it’s awesome,” Klocke said. “I just come out here and do my job. The team is behind me and they support me in every way. In the first couple of games, I realized that I’ve gotten a lot better. I got real excited about it and it boosted my confidence a lot.”

Klocke dedicated himself to lifting on a regular basis this season as he knew the Vikings had graduated a lot of good seniors from last year’s state championship team. His lifting motivator was none other than Fritcher himself as the two were able to help each other out.

“I’ve never seen anyone lift as hard as that dude has this year. His mindset is ridiculous and sometimes he’s in there five or six times per week,” Fritcher said. “He’s been small his whole life, but he put the work in. I know he’s going to be a stud at Luther because I’ve seen him grow, physically and as a baseball player.”

Klocke has utilized a strong offspeed pitch that he relied on as a youth player to compliment his newfound fast ball to baffle hitters this season. When he’s on the mound, the Vikings have a great chance to win and Krekling is well aware of that fact.

“Nolan is a pitcher. Even at a young age, he could throw multiple pitches for strikes and he would always hit the glove wherever you put it. We always said, when he grows into his body, he’s going to be a heck of a pitcher,” Krekling said. “I was hoping it would be sooner than his senior year, but man, he looks the part now. He hasn’t missed a weight room day in over a year and he’s a physical specimen now.”