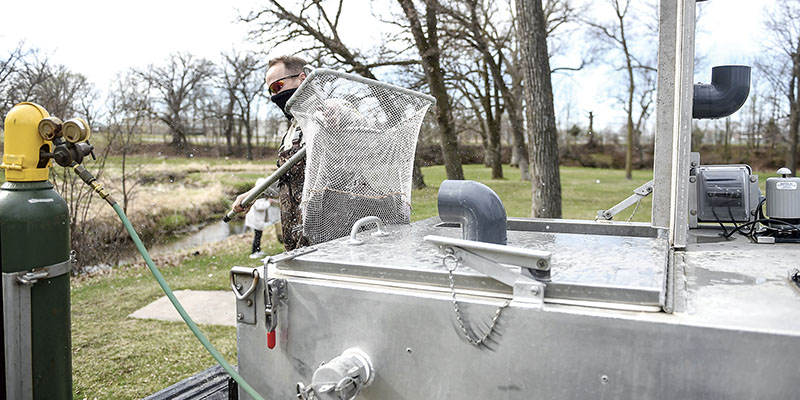 For a third year, the Minnesota Department of Natural Resources will stock Wolf Creek, which runs through Todd Park.

As in the previous two stockings, 300 trout will be inserted prior to the trout opener this Saturday with another 300 slated to be stocked sometime after the season begins.

Wolf Creek is part of an effort to turn the slim stream into a trout destination that is readily accessible, and filled with trout that are ready to take immediately in what is termed as a “put and take” stream.

According to Waterville Area Fisheries Supervisor Craig Soupir, Wolf Creek has been marked as a success so far.

“The reports I’ve gotten have been favorable,” Soupir said, referring to anglers he’s heard from who have fished the stream. “That’s what it’s really about. Providing a trout fishing opportunity in southern Minnesota.”

However, there is still some question as to how last year’s drought will affect the fishing and just how much that will carry over into this year.

According to the US Drought Monitor, Mower County is still listed as abnormally dry and Wolf Creek itself is down significantly, though with this year’s snow melt and early rains it has risen somewhat.

“Water levels are variable and it depends on the flow,” Soupir said. “Because of the significant drought last fall the stream is really low.”

It’s part of the reason why it’s advantageous to signify Wolf Creek as a put and take stream and why the DNR isn’t concerned about carry over from one year to another, like what was attempted in the late 70s and early 80s.

“We want people to take these fish,” Soupir said. “It’s not a bad thing to not carry over from one year to the next.”

“Based on the water stage, it looks about the same as it did last year, maybe a little bit lower,” Soupir said. “Looks like it’s going to be good for some stocking. We should be okay and the artesian well is still flowing.”