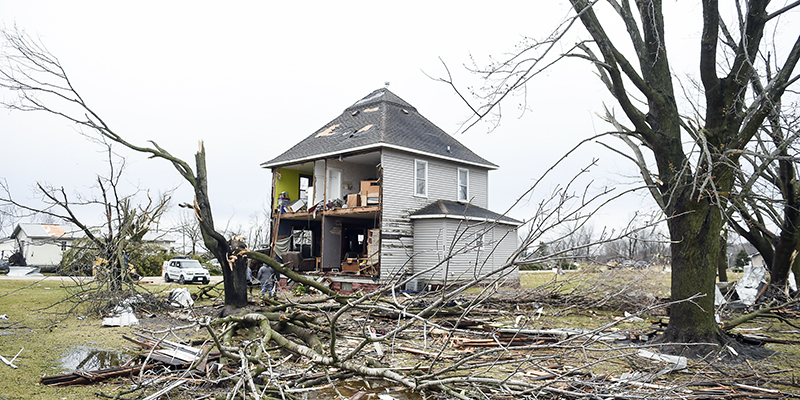 Unless you have lived through the immediate impact of a tornado, it’s hard to truly understand what the people of Taopi are probably coming to terms with in these days directly following Tuesday’s EF2 tornado.

Of the 24 buildings in town of just over 60 people, 10 were completely destroyed by the tornado, one of five which touched down in our little corner of southeastern Minnesota and northeastern Iowa.

In the end, only seven buildings were left largely undamaged.

What these numbers mean is that a large majority of the people living in Taopi will be dealing with life-altering changes for quite some time.

I’ve related my own story of living through a tornado in the past. My small hometown of Lake Wilson, located north of Worthington in the southwestern corner of the state, was one of several communities impacted by the country’s only EF5 tornado of the year on June 16, 1992.

Recapping quickly, it dropped down to the south of Chandler, our southern neighbor who we shared a school with, and marched north. Chandler took a direct shot and Lake Wilson took its own shot on the west half of the community.

During the tornado’s life it destroyed 75 total homes along its path and wrought $50 million worth of property damage.

It was a whirlwind of a couple days as me, my friends and neighbors dealt with the surreal fallout of the storm’s wrath, and I remember the media swarming our town.

On Wednesday morning, now a part of the media, I traveled to Taopi and a lot of these memories started coming back.

I walked along the streets of Taopi just taking it all in, and admittedly felt like something of a voyeur. You can’t help but feel this way. As I, or any member of the media are all too aware, to record this damage you have to peer into people’s lives. It’s all over the place and in some cases you have a wide-open look into people’s homes.

The media has to know this, but more than that we have to understand this and be respectful of the people trying to pick up their lives after such catastrophic change.

What’s amazing, and something I’ve discovered over the years of living through such events and covering others, is just how accepting people are to talking about what’s just happened. They may not be happy or thrilled, but they talk nonetheless.

I know we did, but for us kids, especially me and my friends, it was easy to talk about it. Our homes were not damaged in ‘92.

Maybe it’s a coping mechanism. Maybe it’s a need to understand, though I don’t profess to know for sure because I can’t truly be in the shoes of those living in Taopi. All we can do is listen and possibly relate.

It just dawned on me as I was writing this Thursday afternoon that we’re coming up on the 30th anniversary of my own experience. It will be two months exactly from this Saturday and even though it’s been three decades the memories of that day are still pretty surreal.

It could be that way for the residents of Taopi as well. This is only the beginning of a very long road and it will undoubtedly change Taopi forever.

It’s hard to say what that future will look like. Lake Wilson and Chandler largely built back and today, you wouldn’t know it was affected by a tornado unless you know exactly what buildings were once there and which ones are no longer there.

But I do know small communities and I have no doubts that Taopi remains. It’s a hope Taopi Mayor Mary Huntley had Friday afternoon as well. People will rebuild.

Small communities have a strong habit of standing together during times like this. We saw that immediately on Wednesday as clean-up began.

It wasn’t long before skid-loaders began moving trees and the hum of chainsaws filled the air. Neighbors continued to check on each other, help each other, comfort each other.

Clean-up will continue and soon sights will be set on tomorrow and the day after that. Always there will be another day.

Taopi will be different in the end, but to those choosing to call the community home … it will still be Taopi.