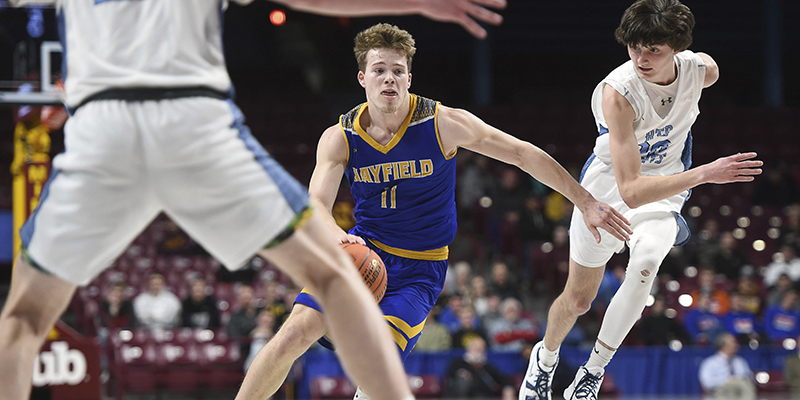 Hayfield’s Isaac Matti weaves through the defense during the first half against Russell-Tyler-Ruthton in the Minnesota Class A quarterfinals Wednesday in Williams Arena. Photos by Eric Johnson/photodesk@austindailyherald.com

The junior averaged 20.6 points, 4.6 rebounds and 4.5 assists per game. Matti shot 46 percent from the field 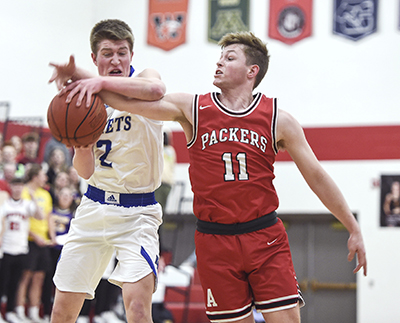 Austin’s Gage Manahan reaches in to try and take the ball from Kasson-Mantorville’s Jordan Klepel during the first half of their Section 1AAA semifinal game in Packer Gym. Herald file photo

The senior’s energy level dictated how the Packers’ would play on a night by night basis. He provided an all-around impact as he averaged 7.8 points, 3.6 assists, 3.4 rebounds and 3.8 steals per game.

The junior did a little bit of everything all of the time for the Athletics as he averaged 22.6 points, 8.8 rebounds and 2.6 assists per game. Koak, who was L-P’s rim protector on defense, was named SEC player of the year and he now has 1,634 career points.

The senior averaged 22 points and seven rebounds per game.

The junior averaged 15.5 points, 4.1 rebounds and 3.4 assists per game. Pack hit the second most three-pointers (106) in a season in Hayfield history as he shot 39 percent from the arc.

The senior averaged 23.3 points, 12.6 rebounds, 3.5 assists, 3 blocks and 1.9 steals per game. Kittelson set a BP single game scoring record with 48 points against Triton and a single game rebounding record with 24 against USC. The senior scored 605 of his 1,006 career points this past season.

The senior filled a lot of holes on defense and on the glass, while proving to be a capable offensive player. Fritcher averaged 13.7 points, 8.6 rebounds and 5.3 assists per game. He finishes his career with over 1,000 career points and over 900 career rebounds. Fritcher shot 58% from the field.

The sophomore averaged 8.6 points and 8.5 rebounds per game, while shooting 63% from the field.

The senior averaged 6.0 points, 2.9 rebounds, 2.6 assists and 2.8 steals per game. Foster’s 94 career steals are the second most in Hayfield history. He also took 20 charges this season.

The senior averaged 7.5 points, seven rebounds and 3.5 assists per game.

The senior put up 17.2 points, 8.0 rebounds and 1.8 assists per game, while shooting 53 percent on two-point field goals, 50 percent on three-pointers and 78% on free throws.