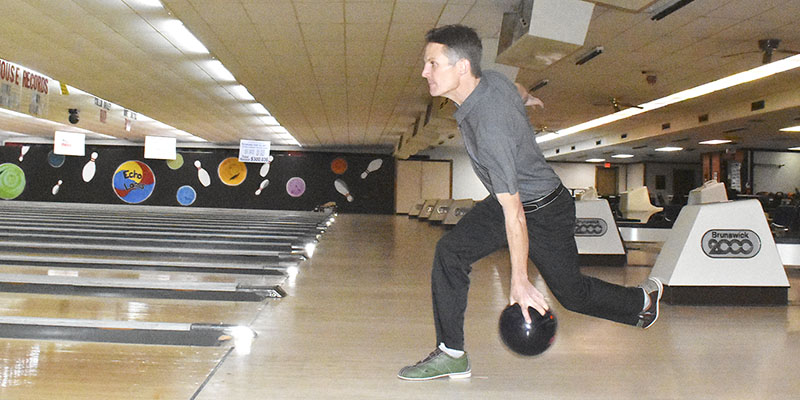 Mike Matyas lines up for a throw at Echo Lanes Wednesday. Rocky Hulne/sports@austindailyherald.com

Austin native Mike Matyas can’t help but get nostalgic whenever he walks into Echo Lanes. The soothing sound of a ball rolling down the wooden lanes and the thunderous applause of the pins flying in 10 different directions after a spot on strike bring a grin to his face as he recalls all of the hours he has spent at Austin’s lone bowling alley. 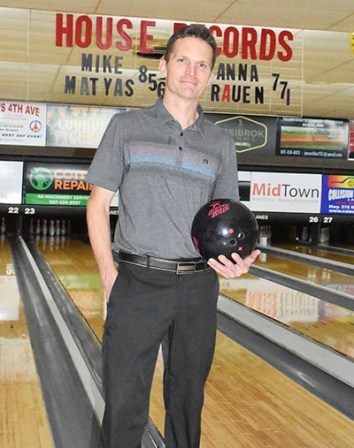 Matyas was recently named the latest inductee into the Mower County Bowling Hall of Fame and his name will now be placed at Echo Lanes, along with the other great bowlers who have played in Austin.

Matyas is a 1997 grad of Austin High School and he worked at Echo Lanes as a youngster. He began bowling in fifth grade and he took the sport seriously by the time he was in high school. Matyas is the holder of the all-time series record at Echo Lanes when he rolled an 856 about 15 years ago.

“I don’t even remember it, but that was a special night for sure,” Matyas said. “I had broken it, someone else broke it, and then I would break it again.”

Al Smith, who was inducted into the Mower County Bowling Hall of Fame in 1998, was a big influence for Matyas, along with his mother Lori, his grandpa Dennis Olund, and his youth coach Dave Schafer.

“They gave me the key to the place, so I would bowl after work,” Matyas said. I had a lot of late nights bowling with Marilyn and Al.”

Matyas has had a lot of success as bowler as he won four amatuer tournaments in the cities.

Matyas used to bowl at Echo Lanes three times a week, but now he plays in a league just one time per week. He treasures his time with bowling, but he wishes that the current generation would appreciate the sport as well.

“The youth bowling for the kids was really popular out here when I was younger,” Matyas said. “I wish it was still like that.”