Robot is a guiding hand 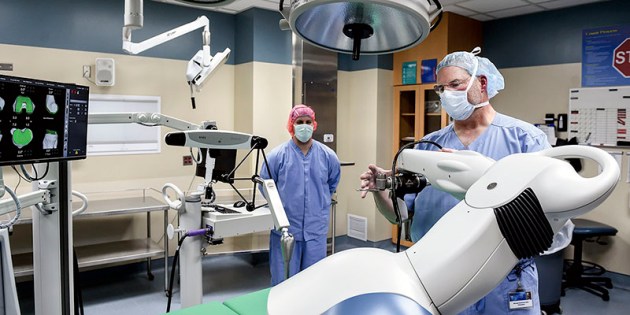 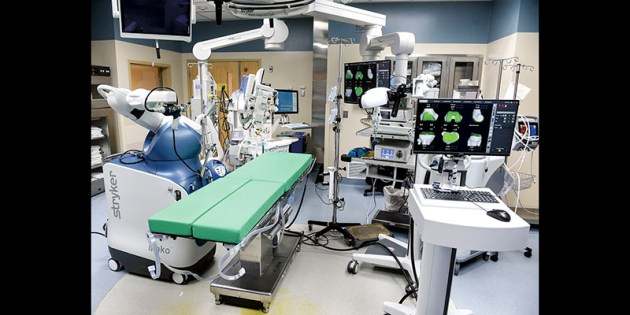 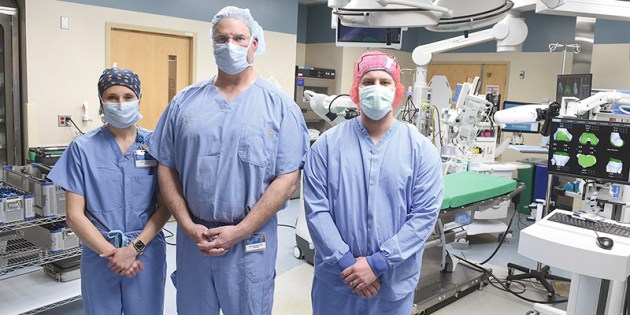 Kaitlin Goforth, PA-C, Mike Eckstrom, M.D. and a Mako Product Specialist (who could not be named) stand in the surgical suite with Mayo Clinic Health Systems-Austin robotic arm in the background. Eric Johnson/photodesk@austindailyherald.com 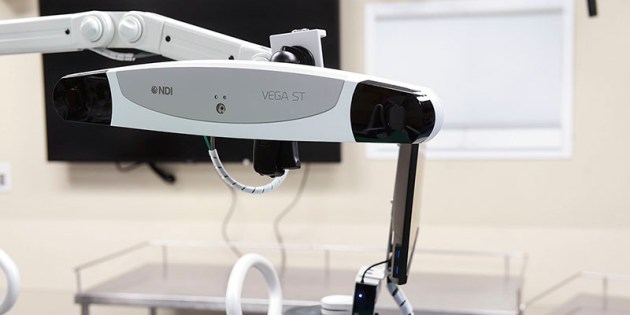 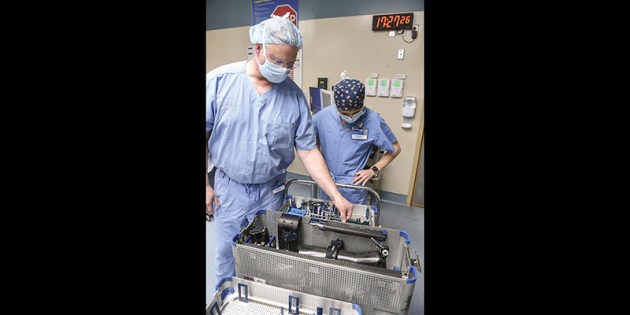 Orthopedic surgeon Mike Eckstrom, M.D. and Kaitlin Goforth, PA-C show off some of the tools they use with the robotic arm use hip and knee replacements. Eric Johnson/photodesk@austindailyherald.com 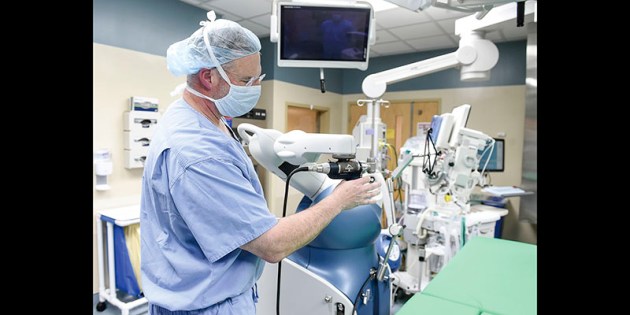 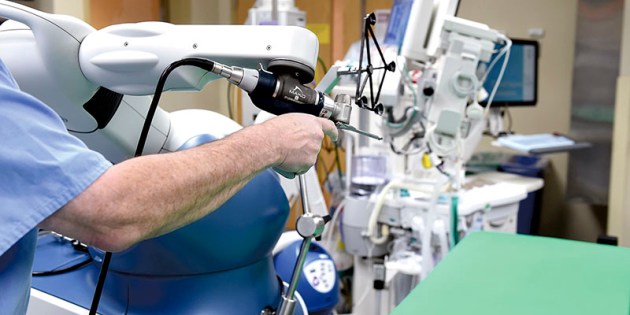 Cutting edge technology is coming to more and more operating rooms of hospitals and this is especially true at Mayo Clinic hospitals.

One such piece of equipment comes in the form of robot-assisted surgery at Mayo Clinic Health Systems-Austin and is playing a major part in hip and knee replacements.

The team at Austin, headed by orthopedic surgeon Michael Eckstrom, M.D., has been using the robot from MAKO since November, and through the use of the robot has been able to bring a level of precision to the procedures not seen before.

“It’s been around for a while, but it’s new to us,” Eckstrom said. “Basically the robot is used to help us place total knees and hips and actually partial knee replacements. It does several things for us. I wouldn’t want to do a hip or knee replacement without it now.”

The system, operated by a MAKO product specialist in the room with the team, helps the surgeon zero in on the area being operated on through a guidance program.

With a camera and a mapping system, the robot locks on to the targeted area and helps guide the surgeon’s hand into the proper and precise positioning of the prosthesis.

Once locked in, safety features prevent the arm from straying away from the programmed path. It also helps determine the proper amount of bone that is cut away during the procedure.

“Theoretically, with better positions patients have a more stable joint, they have less pain and recover quicker,” Eckstrom said. “The hope is that by placing in a much more consistent fashion that we have an increase in longevity.”

It’s hard to miss the robot upon walking into the surgical room. At the center is the operating table the patient lays on with the “eye” of the robot positioned off to one side and the robot arm flanking the other.

Prior to that, the team will get a CT scan of the knee or hip to create a three dimensional model for mapping.

“Based on that, the computer knows exactly where the knee or hip is,” Eckstrom said. “Based on that then it guides us. Me and the representative will plan how much bone we’re going to take off in order to replace it with the joint prosthesis. After we plan this all out, the robot guides the power tools I have. I do the cutting, but the robot guides me and keeps me exactly where I need to be.”

While the robot has proven to be an important part of orthopedic surgery, it naturally came with new training. The team needed about 30-40 hours of training to familiarize themselves with the robot surgery.

But it doesn’t change the surgery itself.

“There was a learning curve for us as well, but in terms of roles in surgery, we’re just as involved and needed in the case,” said Kaitlin Goforth, PA-C, one of two physician assistants on Eckstrom’s team along with Brie-Anne Tubbs.

While it doesn’t necessarily change the surgery itself, it does have a dramatic effect on how it’s conducted.

It requires the team, which serves both Austin   and Albert Lea patients, to redefine how tasks are carried out.

“It really does drastically change the workflow of the case,” Goforth said. “Essentially, we’re doing the same procedure, but we’re going about it in a completely different way. We’re using robotic technology to enhance the procedure. It is a big learning curve, but we all, I would say, we’ve reached that learning curve and it’s smooth sailing and we’re really getting quicker at it.”

One noticeable aspect for the patient is that it shortens the time frame in which he or she could spend in the hospital and in recovery. Patients are often returning home the same day the surgery is being conducted, though it’s an indirect observation.

“In general, yes it has,” Eckstrom answered. “I can’t say it’s directly because of the robot, but we do a lot of our patients as outpatients now. We can safely do these for the patients and a lot of the time get them home the same day.”

Very little has changed in the surgery itself. The robot has just allowed the staff to become more efficient through increased precision.

“Keep in mind, we’re doing the exact same thing we’ve always done,” Eckstrom said. “The principles of what we’re doing are all the same, whether it be a hip or a knee. What’s new is the workflow. Part of our training is understanding, a deeper understanding, of what this robot is doing for you. What it can do, what it can’t do.”

One thing staff know for sure is how happy patients have been with the results.

“Can I please get on the schedule to replace my other joint?” Goforth said they are hearing. “Really and truly they are happy. I would say they are happy quicker. Their post op is expedited.”

Cathy Davis, of rural Albert Lea, is one of those satisfied patients. In November of 2021, she had a hip replacement and then a total knee replacement this past February.

“The hip replacement, that just seemed to go fantastically well,” Davis said. “Two and half weeks, three weeks tops, and I wasn’t using a walker or a cane walking around. I just thought the whole process went fairly well.”

After two successful surgeries, Davis is back on the schedule for a third time to get the other knee replaced.

“The knee itself needs to be replaced and is painful,” Davis said, but said it was worth it if she can get back to doing those things she loved to do, but couldn’t anymore — like riding horses. “Getting on and riding that day was fantastic. There was no pain in the knee.”

Currently, there are four robots in use in the Minnesota, Wisconsin Mayo system: Austin, Red Wing, Mankato and LaCrosse, Wisconsin.

This push for more advancement in technology has been a grounded push by Mayo.

“This is a technology advancement that improves procedures safely to the patients,” said Dr. Sumit Bhagra, M.D. Site Lead Physician for Austin and Albert Lea. “It’s an example of technology coming to community sites and that’s one of the advantages of being in a large system.”

Ultimately, the use of robot technology and the advantages it brings, best serves the patient and is a driving force as to why Mayo has put such effort into being on the front line of technological advancement.

“We really look at everything from the patient’s best interest perspective,” Bhagra said. “We’re happy to invest and to bring this technology close to home for our patients.”

“Technology is really permeating all aspects of our life and this is really no different,” he added.

Surgical teams are seeing the same kinds of things.

“It’s an advancement of the information that’s available,” Goforth said. “At baseline, we understand how to replace a knee or a hip and now we know even more about that patient and how we can make their outcome better.”

And better yet, people are getting back on their feet again.

“I think it was a positive move on my part,” Davis said. “I was getting so I couldn’t get around at all. I’m three times better and it will be better yet the more exercise I get and strength.”